On Wednesday I posted a selection of old photographs of the Meta Sudans, and asked why Mussolini demolished it.  I then came across an article by Elizabeth Marlowe, ‘The Mutability of All Things’: The Rise, Fall and Rise of the Meta Sudans Fountain in Rome,[1] which answered some of these questions. 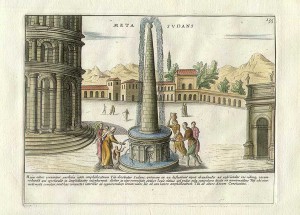 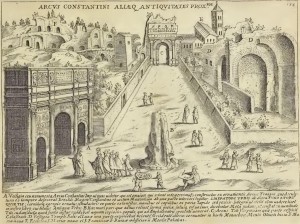 By the 19th century, the Meta Sudans was in a sad state.

Already in 1816, the architect Valadier had lamented the fact that the passage of time had produced ‘the most wretched ruins [disgraziatissime rovine]’ right in front of the ‘Famous Flavian Amphitheatre’. A major restoration campaign undertaken in mid-century can be understood as an attempt to address the problem of the Meta’s ugliness. The precarious, upper reaches of the cone were removed, the concavities of the former niches filled in and its jagged, timeworn surfaces smoothed, producing the stable (if somewhat dumpy) appearance of the Meta seen in numerous photographs and postcards of the late nineteenth and early twentieth centuries.

It is a pity that no reference is given for the “restoration campaign” – one would like to know more. 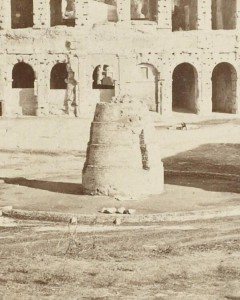 The official commission of 1871 advocated the undertaking of ‘all those demolitions that will enhance the grandeur [imponenza]’ of the major monuments of Rome, with the aim of creating the ‘most scenic vantage points free from clutter or inconvenience [senza ingombro e senza disagio].[40] Under these conditions, the Flavian fountain could no longer compete with its erstwhile sibling, although it would take sixty years, and the force of Mussolini’s urban ‘sventramenti’ (disembowelings) to finally bring the axe down.[41]

The vestiges of ancient Rome, carefully selected and manicured, played an important role in Mussolini’s creation of a monumental city-centre worthy of grand, Fascist spectacles.[42] While planners had long recognized the need for an artery linking Piazza Venezia with the southern part of the city, the issue for Mussolini was less one of circulation than of symbolism. One should be able to stand at the Piazza Venezia, seat of the new government, and see the Colosseum, emblem of Rome’s glorious past. Like his Risorgimento predecessors, he believed that ‘the millennial monuments of our history must loom gigantic in their necessary solitude’.[43] Never mind the fact that the Velian hill, three churches and 5,500 units of housing stood in the way. All were demolished during the 1932 creation of the ‘via dell’Impero’ (now the via dei Fori Imperiali), a showcase of the Fascist appropriation of the past.[44] The mostly buried ancient imperial fora that flanked the route of the new boulevard were excavated, and the road lined with bronze statues of the emperors associated with the fora, along with maps chronicling the expansion of the Roman Empire in antiquity and in the Fascist era.

But Mussolini wasn’t finished yet. His new parade route was not to be limited to the via dell’lmpero, but would continue to the south, past the Colosseum, through the ‘Flavian piazza’ and the Arch of Constantine and down the via S. Gregorio to the Circus Maximus. The via S. Gregorio was thus widened, repaved, spruced up with Fascist dedications and rechristened the ‘via dei Trionfi’, to underscore the topographical and ideological parallels between this route and that of the ancient Roman triumphal procession. Most importantly, the Stele of Axum, Mussolini’s trophy from his newly conquered Ethiopian empire, was installed in 1936 at the new terminus by the Circus. …

The Meta Sudans and the colossal statue base were doubly doomed. Not only were they not very attractive, but they stood directly in the path of the central passageway of Constantine’s Arch, thus preventing parades from marching straight through. A photograph of a ceremony held just after the inauguration of the via dei Trionfi reveals all too plainly the awkwardness and asymmetries that ensued (Figure 2.6), and which prompted the Governatore of Rome, Francesco Boncompagni Ludovisi, to declare the ruins ‘a most serious embarrassment’. This skewed topographical relationship had been acceptable under Constantine, when the triumphal route had turned left just beyond the Arch and continued up the via Sacra through the Forum Romanum to the Capitoline temple. Much of this very route had been self-consciously retraced as recently as 1536, when Charles V made his triumphal entrance into Rome. But the Fascist parade route ignored the via Sacra, continuing instead up the full length of the Colosseum piazza, and only turning left once it reached the via dell’lmpero.

To make the piazza serve the function of ceremonial thoroughfare, the Meta Sudans, as well as the statue base, had to go. Both were razed in 1936, the year of the dedication of the Stele of Axum. On Mussolini’s orders, however, the memory of the decrepit structures was not to be entirely erased. The archaeologist A. M. Colini was given two years to investigate thoroughly the remains of the ancient fountain, and his findings were published along with two careful reconstruction drawings by the Fascist architect Italo Gismondi (Figure 2.7).[45] Moreover, like the police chalking around a fallen body, the contours of the monuments’ vanished forms were outlined in a lighter coloured stone on the surface of the newly repaved piazza …

It is interesting to learn that the base of the Colossus survived this late.

It is also interesting to realise that the Colosseum actually stood in a hollow in the hill, until Mussolini cut through the Velian hill to make the Via del Foro Imperiali, and that ancient parades turned left at the Meta Sudans and advanced into the forum.  The Via del Foro Imperiali distorts the whole shape of the ancient landscape, splendid as it is.

The function of the Meta Sudans is vividly described by Marlowe, and is well worth repeating here.

Independent of its historical referents, the fountain would surely have been a welcome gift in this bustling piazza. Due to a number of natural and unnatural phenomena occurring over the subsequent centuries (including Mussolini’s removal in toto of the Velian hill), the Colosseum valley is much more open and spacious today than it was in antiquity.

In the Flavians’ day, even without the Neronian structures, the constricted space within the valley’s steep walls must have felt oppressively crowded, particularly when thousands of agitated spectators were thronging towards, or bursting out of, the amphitheatre’s west entrance, or lining the streets to watch triumphal parades pass by along the via Saera.

It also must have been stiflingly hot for much of the year. The Meta Sudans seems to have been purpose-built not only to provide fresh, abundant drinking water from the spigots around its base, but also to cool the surrounding air. Its ingenious (though imperfectly understood) design somehow managed to raise water all the way up an inner pipeway in the cone, from which it burst forth out of a spherical finial and then flowed down the sides to collect in a basin below. The fountain’s great height would have widened the range of its cooling mists.

The sensual pleasures afforded by the Meta Sudans would have included the aural and the visual, as well as the tactile. While nothing survives of the fountain’s marble cladding, the depictions of the monument on coins minted by the Emperor Titus clearly show niches around its base (Figure 2.3), which presumably contained statuary. In fact, in the sixteenth century, Pirro Ligorio reports having witnessed the carting off to a private warehouse of the ‘marine monsters, heads of ferocious animals and images of nymphs’ from the area around the fountain.[19] These fragments may have been the inspiration for the Triton in the niche in Du Perac’s elegant reconstruction of 1575 (Figure 2.4)[20] Overall, the fountain must have been a most attractive landmark in the new Flavian piazza, and it is not surprising that many of the numismatic commemorations of the amphitheatre proudly display the Meta Sudans alongside it as an integral component of the Flavian building programme in the valley.

Curiously, there is a postscript to the story.  It seems that some Romans would like to rebuild the Meta Sudans, or something like it on the site.  The project is primarily a political one, unfortunately, designed to rally the left under the guise of attacking Mussolini.  Since Mussolini is remembered fondly by a considerable section of Romans, it seems unlikely to proceed.  But it would be nice to see it rise again, especially if done in a historically accurate manner.

There are some nice photos in the Marlowe article, unfortunately too poor to reproduce in the copy I have.  One shows the Fascists parading past the half-removed Meta Sudans.  Another the Colosseum from the air, showing the site of the base of the Colossus.  It would be nice to have better images of both.  But anyone who has searched for images knows what a hit-and-miss business it is!

The Marlowe article is very valuable, because it gives us such a clear picture of the technical value of the Meta Sudans in its original setting, and so much detail on why it was removed.  I wonder if Colini’s article is online?

UPDATE: I find that a Google Books Preview of Aristotle Kallis, The Third Rome, 1922-43: The Making of the Fascist Capital, 2014, is online here.

2 thoughts on “Further information on Mussolini and the Meta Sudans, by Elizabeth Marlowe”