On June 21 2016 I wrote a post here to the effect that fragments of the lost play, “Palamedes”, by Euripides had been found in a manuscript in Jerusalem by Dr Felix Albrecht.  This I based on other internet reports, in German, which themselves seem to misunderstand the sitiuation.[1]

But after communicating with Dr Albrecht, I find that this is NOT the case.  No fragments of unknown plays have been found.  But the actual find is itself very exciting, and the technology used is a clear advance.

What are the facts? The manuscript is Cod. Hierosolymitanus Sancti Sepulcri 36, which was written in the 13th century, and contains 556 leaves, on which may be found the text of the Minor Prophets from the Greek Old Testament (Septuagint).  But the manuscript was written on reused parchment.  With the aid of a new multi-spectral imaging system, called “Revelator” (for which see below), some extraordinary results can be achieved!

Some of the parchment came from a now destroyed 11th century copy of The Phoenician Women by Euripides, made as a school copy with explanatory marginalia.  That makes it very old, compared to most of our Greek manuscripts, and it is the most important witness to the text.   This itself is an important discovery.  And there are others, as we shall see.

The manuscript has been known for a century, but it was rediscovered by Felix Albrecht, as part of his work to produce a critical edition of the Greek Old Testament.  He has set up “Project Palamedes” to support this work, and he has also published an article on the subject, which he has kindly sent to me.[2]

I found an image of a page of the palimpsest here, from the Euripides section.  It shows clearly the marvellous results of this new multi-spectral imaging technique: 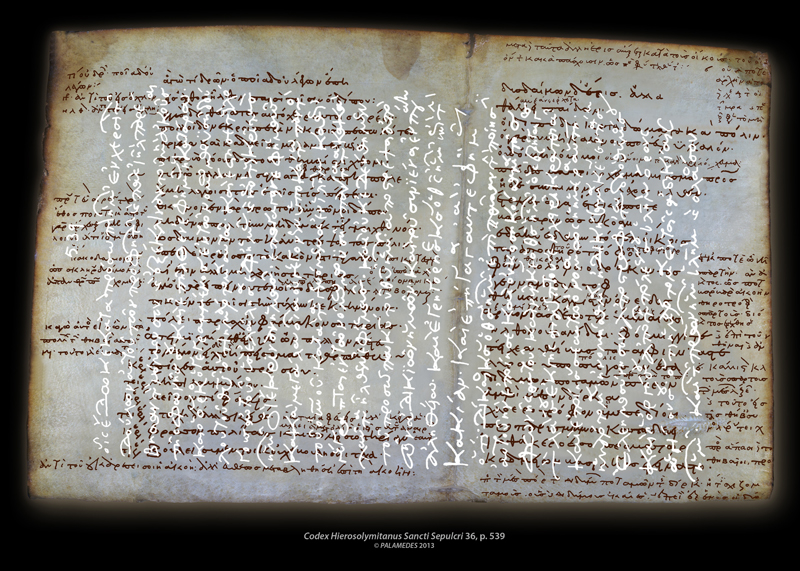 Among the under-texts are also portions of Cyril of Alexandria’s Commentary on Luke, from a manuscript of the 8th century.  This is lost in the Greek original, and preserved only in Syriac.  (I remember scanning the English translation of this, years ago, and placing it online!)  This too is a valuable find.

One quaternion of the manuscript managed to end up in St Petersburg.

Nor is this all.  The project is also working on another palimpsest, Codex Parisinus Graecus 1330 from the library of Colbert.  The upper text is a colourful nomocanon, but it reused pages from a majuscule manuscript ca. 500 AD containing a previously unknown ancient commentary on the works of Aristotle.  There are also ancient diagrams of the highest quality.  Any discovery gives us something, although this one will perhaps be more for the students of philosophy.

I also found a bibliography for Felix Albrecht, here, which suggested other finds of unknown material that ought to be better known.

UPDATE:  Dr Albrecht wrote to me as follows:

Concerning Euripides, we did not find any unknown Euripides texts, unfortunately.

However, the Jerusalem palimpsest contains four new discovered pages of known Euripides text with scholia, which seem to be very interesting, because:

From a scientific point of view, the decipherment of these double palimpsested (bis rescriptus) folios, using a special multispectral imaging system is the most important result of our work.

The multispectral imaging system is called “Revelator” (cf. http://www.mwa-nova.com/revelator.html). The system, which is definitely amazing, allows the user to make images in the full spectrum of light from UV to IR;  it collects the data in a way that the results can be processed in 3D, cf. the following example.

A prototype of that system, invented by Jonathan Albrecht, has been used for the PALAMEDES project.

PALAMEDES volume 1 will be published in 2017: “Greek Orthodox Patriarchate of Jerusalem, Holy Sepulchre Ms 36. A Semi-diplomatic Edition of the Euripides Fragments by Felix Albrecht and Agamemnon Tselikas” (PALAMEDES 1), Athens 2017.

Since few will click through, I do want to say that the “example” included this quite amazing image of a page moving and showing both texts. It is very clear that a considerable technical advance has taken place!

17 thoughts on “WARNING!!! Fragments of Euripides “Palamedes” NOT rediscovered in Jerusalem”