We’ve reviewed the earlier visitors to Antinoupolis.  It’s time to go back to the Description de l’Egypte, made by Napoleon’s engineers, and the detailed description of the city made by them.

In fact it’s a relief to do so.  The shoddy engravings of Paul Lucas are not to be compared to the excellence of the material prepared by the French military engineers.  Compare the picture above of the “triumphal arch” with Perry’s reprint of Lucas’ miserable image, inaccurate because of damage even in Perry’s day:

There is rather a lot of material about Antinoupolis in the Description, and all of it is by Jomard.  The material is in three places:

At the cross-roads in the centre of the city, there stood four columns, on bases.  An inscription on each of the bases recorded that the pillars were erected by Alexander Severus, although only two bases remained by modern times.  Here is Jomard’s plate of the cross-roads:

I wrote here about Richard Pococke’s publication of the inscription.  But Jomard makes a much better job of it.  In his description in vol. 2, p.22, he gives this image of what he could actually see on-site:

And then this reconstruction with Latin (!) translation. 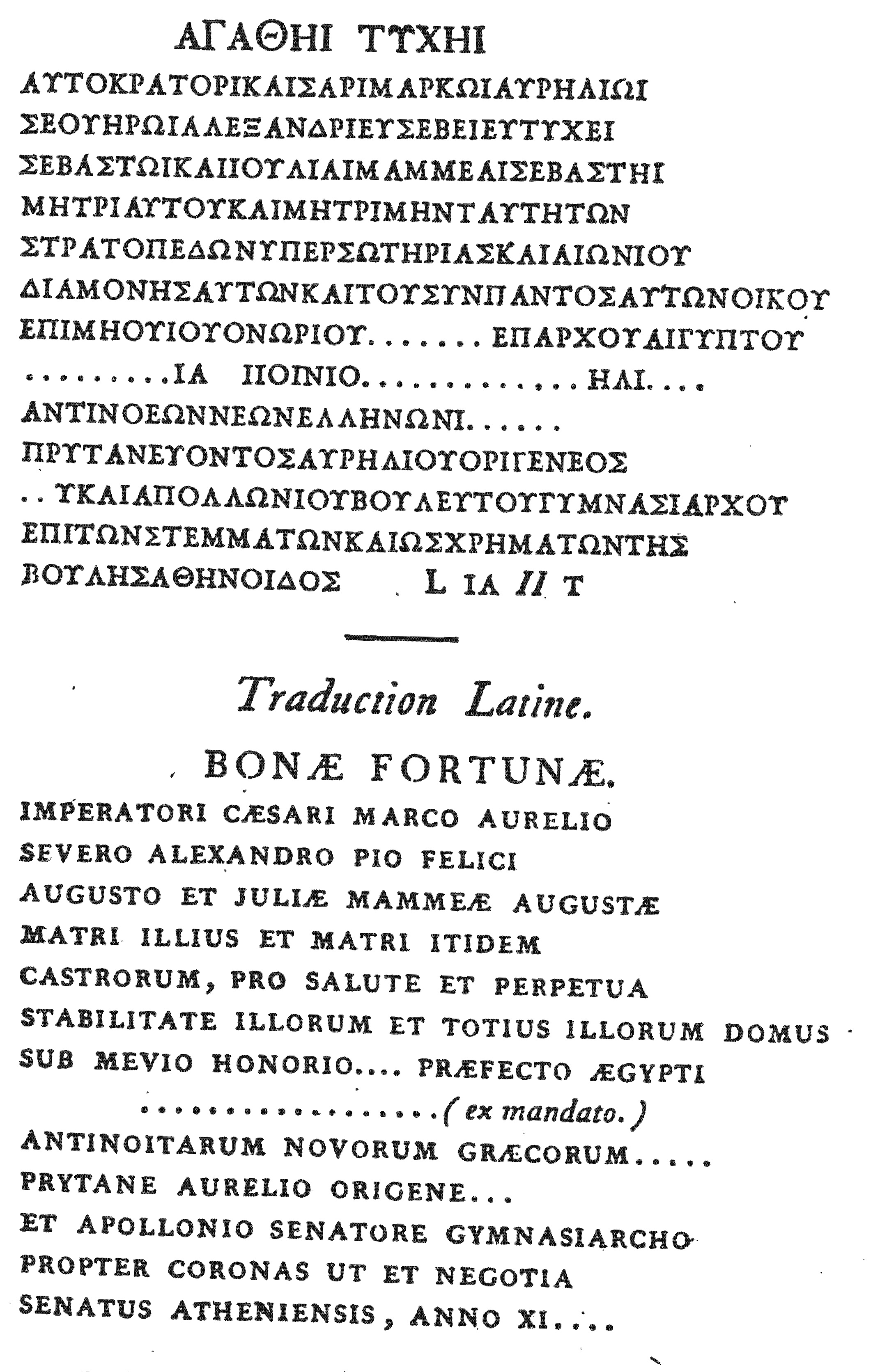 I.e. “For good luck.  To the emperor Caesar Marcus Aurelius Severus Alexander, Pious, Lucky, Augustus; and to Julia Mammaea the Augusta, his mother and also mother of the army camp, for safety and their perpetual stability, and of all their house, by Mevius Honorius …  prefect of Egypt … [i.e. at his order] … of the new Greeks of Antinoe, Aurelius Origenes being Prytaneus and Apollonius the senator being gymnasiarch, on account of the [triumphal] crowns that also by the action of the senate of Athens, in the 11th year …”

Jomard tells us that the inscription appeared on all four column bases, facing the crossroads, and was of 14 lines.  It was carefully engraved on the flat spaces left for it.

It’s all gone now.  Blown up, smashed to pieces, and used for building materials by the local inhabitants.

There are people who take things so much for granted that they scoff at scholarly literature as simply making copies on paper of what can be seen more easily in the round on the ground.  That is, of course, exactly what the literature does.  For what is on the ground can vanish.  That’s why it has to be recorded, in multiple copies.

Thanks to the effort of Edme François Jomard the column and the inscription of Alexander Severus is preserved for us all today.

UPDATE: I finally located Jomard’s drawing of the inscription, in vol. 5, plate 56, of the Description de l’Egypte (online here).  The plate contains a bunch of inscriptions.  Two, numbers 18 and 19, are labelled as from Antinoupolis.  Here they are:

Presumably these are transcribed from the two pedestals.

2 thoughts on “The Antinoupolis inscription of Alexander Severus, in the “Description de l’Egypte””