In late antiquity the Saxons started to make raids into the Roman province of Britannia.  This they did by sailing across the North Sea – the Narrow Seas, as it is also known – in open boats.  In response to this the Romans built a chain of impressive forts along the British coast, under the command of a “Count of the Saxon Shore”.  A couple of these still exist in significant form, at Porchester where a Norman keep was added, and at Burgh Castle in Suffolk.  Others have disappeared.

One of the vanished forts was located on the Suffolk coast somewhere, at “Walton”.  There is more than one place of that name available.  There is Walton, which was a medieval village near a small fishing hamlet named Felixstowe.  But at the start of the 20th century Felixstowe became a seaside resort and has since swallowed up the whole area.  There is also Walton-on-the-Naze.  At neither place is there anything to be seen.  General publications on the area often cast doubt on whether there was any such fort.

At the weekend I came across an article published in 2000 on “Walton Castle”.  It seems that, far from being unknown, the fort stood on the cliffs at Felixstowe, to the south of a valley called “The Dip”.  There are 18th century sketches of the walls, which stand almost full-height.  The coast-line is sand, and is eroding, and so the whole structure progressively fell into the sea before 1800.

But there is more.  Great masses of Roman brick, stone and concrete do not just disappear, just because they have fallen down thirty feet and been covered by water.  They should still be there.  The article sadly suggests that a lot of it was hauled up and used for hardcore at Harwich port at the same time.

However, it seems that in 1969 the local sub-aqua club went out and surveyed the area, and a report was filed with the local museum in Ipswich.  The article refers to this as the “Errington manuscript”.  No doubt this is typescript and hand-drawn diagrams.

Even more interestingly, I came across a webpage with a photograph of the area, taken by a Dr Sam Newton at very low tides (the sea is very shallow): 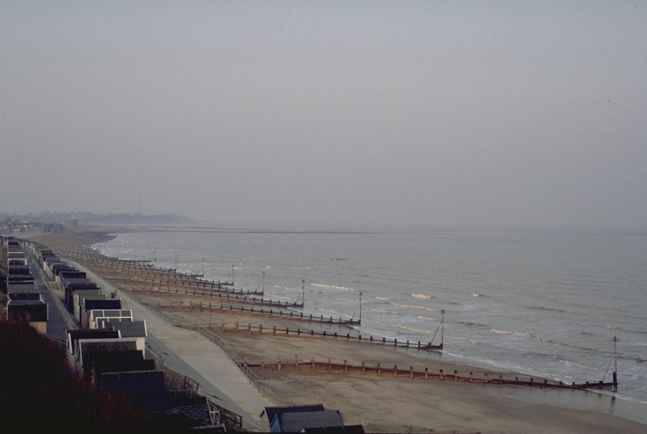 Note the dark mass in the sea, right in the centre of the photograph.  This, the site says, is a bit of wall poking above the waves.

Last night the low tide was at 16:50, so I went down there and had a look.  There was nothing to be seen.  Probably it requires an unusually low tide.  But it was hard to see exactly from where the photograph was taken.  I went again this morning and just scouted the area.  But I need to go again.

Also this morning I contacted the Ipswich Museum, and I have written an enquiry to their collections team to see if I can get hold of a copy of the Errington manuscript.  This ought to specify precisely where the ruins are, and what is to be seen.

It is fifty years since the original dives were made.  I wonder if the local sub-aqua club (which still exists) might be interested in going out there again?  I wonder how much there is there?  What can be seen?  If the ruins are that close to the surface, what might a drone be able to photograph on a still day?

All very interesting anyway.  I’m still working on QuickLatin, but I will look into this further and write more!

6 thoughts on “From my diary: looking for the Roman fort of “Walton Castle””