Continuing from yesterday…. A little more information about Menelaus of Alexandria can be got from Roshdi and Papadopoulos’ introduction, although not without effort.

On page 13 they tell us about the lost work of Menelaus:

The Book on the Elements of Geometry, translated by Thābit ibn Qurra, was quoted by other scholars, like al-Bīrūnī.37

With the deeply unhelpful footnote:

One’s heart sinks, doesn’t it?  What’s the chances of getting hold of an Arabic work printed in Hyderabad in India?  And a Google search gives you nothing.  Anyway, I couldn’t read it.

Fortunately specialist J. P. Hogendijk has a webpage on al-Biruni, with bibliograph and links here, including PDFs!  The work in question turns out to be al-Biruni’s work on “Chords”.  The Hyderabad edition is there for download!  But even better:

Yes, the links to “scan” are PDFs of the article!  And the volume of Bibliotheca Mathematica 11 (1910) is online at Europeana here.  In fact Hogendijk also tells us that the manuscript is “Leiden Or. 513, 108-129”, and provides a scan of photographs!  This is such a valuable site!

So we can now see what al-Biruni had to say about Menelaus of Alexandria.  It’s on p.31 of Suter’s article.

1. Let us draw two straight lines from two given points, which form a given angle with each other, and whose sum is equal to a given line, by me.

In the second section of the third book of his work on the Elements of Geometry Menelaus wanted to prove how a broken line is drawn in a given semicircle, equal to a given line; but he took a very long journey for this purpose. (1) Afterwards Thabbit ibn Kurra treated (this proposition) in his commentary on this book (Menelaus) with a pathway as long as Menelaus himself. Now that the properties of the broken line have become known, (2) the treatment of this task of Menelaus has become easier and extends now even more generally on all arcs of a given circle (not only on the semicircle).

The footnotes are just references to studies.

Well, it doesn’t tell us very much in truth.  It confirms that Menelaus’ lost work on The Elements of Geometry did survive into the 9-10th century, and was in the hands of the translators in Baghdad, and was in at least 3 books.  We know from elsewhere that Thabit ibn Qurrah translated it into Arabic.

Still, it’s nice to get this far.  Even the baffling reference could be elucidated, with a bit of ingenuity and the use of the world-wide web.

I ran out of time when doing yesterday’s post so I had to cut short my investigation of Arabic sources for Menelaus of Alexandria and just post what a secondary source said.

Today we only know the Sphaerica of Menelaus; but his Elements of Geometry were translated into Arabic by Thabit ibn Qurrah in the 9th century.

Apparently a certain al-Sijzī was familiar with the work in Thabit’s version, or so I learned from the article by Rashed and Papadopoulos.  I thought it might be interesting to find out more.

I’d never heard of al-Sijzī, although he is the author of some 20 astronomical works and 40 mathematical ones, most unpublished.[1]  But I discovered today that an English translation of one of his works is online in the Wayback When Machine in Archive.org, here.[2]  Sadly this is not the one that mentions Menelaus.

Following R&P’s reference leads us to an unpublished source and an article inaccessible to me.[3]  So sadly we can’t see what al-Sijzi actually says.  Still, not bad going for a language that I don’t read. 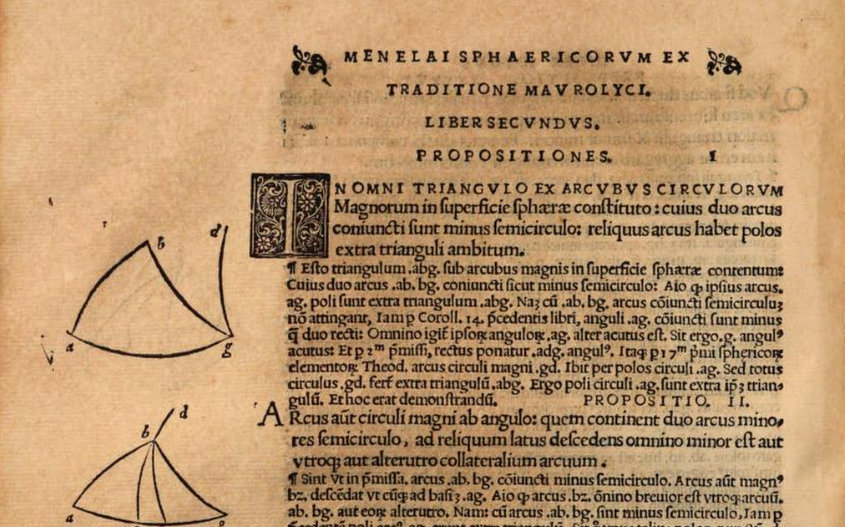