In my last post I looked into John of Nicaea – or John of Nike, as we ought to call him – and found the full version of the De nativitate Dei text that Migne quoted briefly in the PG 33 to show that Cyril of Jerusalem wrote to Pope Julius I to find out the day of Christ’s birthday.  The story was spurious, of course, and I discussed it in the Dubious Claims post.

Migne also quoted another version of the story, with a reference to  Cotelier, Patres Apostolici, i.316 (1724).  Let us see, then, what the original has to say.

It is easy enough to find the Cotelier volume, so long as you ignore the title above and search for “SS. Patrum qui temporibus apostolicis floruerunt, Barnabae, Clementis”…, the actual title of the work, and use Cotelerius, the Latinized form.  The 17-18th century habit of giving books very long names, which inevitably were abbreviated, is a problem until you are aware of it; whereupon you search for the author on Google, and hope to find what his works were, and so guess at the real title.  The 1724 edition is a reprint, but volume 1, p.316 is here. 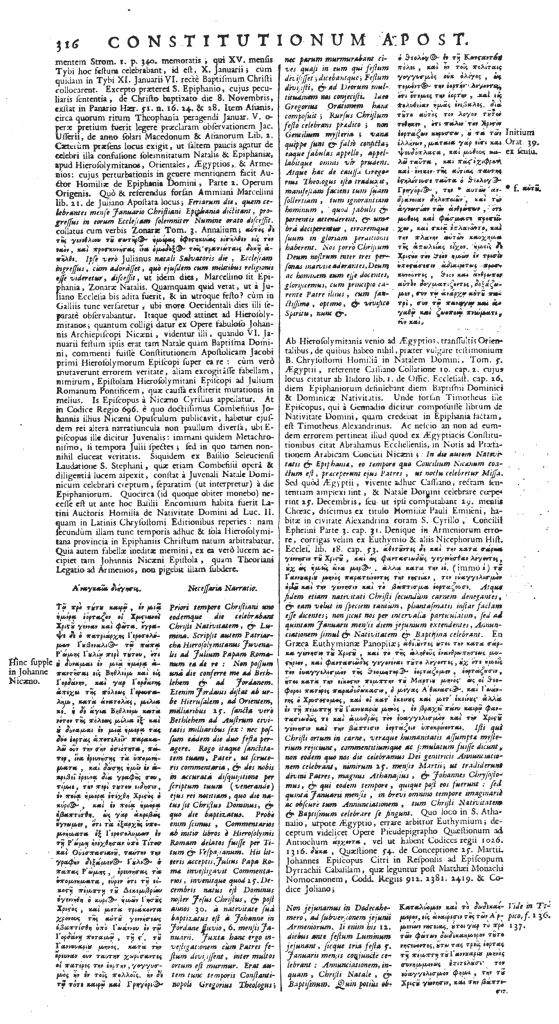 The passage is again longer than Migne prints, which ended with “…among many a murmur arose”, three lines from the bottom of column 1 in the page image above.  The continuation tells us that Gregory the Theologian quelled the objections to dividing the festival into two parts.

But even this longer passage clearly has been abbreviated.  Where does it come from?

Well, Cotelier tells us that it comes from a Paris manuscript, with the shelfmark “Regius 969”.  This is the shelfmark in the old royal library.  Of course the modern Bibliothèque Nationale Français has its own system.

Older literature often uses old shelfmarks.  The BNF online catalogue is not bad, but a search for “Regius 969” drew blank.  Fortunately Cotelier tells us that the “John of Nicaea” letter was edited by Combefis: “And in ms. Regius 969, from which the most learned Combefis published that work of John of Nicaea, there is another little narrative on the same subject which is not markedly different, where the bishop is called Juvenalis:…”.  Page 200, note 102 of Glen L. Thompson’s book on the correspondence of Pope Julius tells us about the letter of John of Nicaea – which is in the same ms., remember – that:

So the current shelfmark of the manuscript is BNF gr. 900.  This is online here, although in a monochrome microfilm.  Thompson tells us (p.201) that our fragment is found on fol. 120 of the manuscript, under the title Ἀναγκαία διήγησις (=necessaria narratio, necessary narration), and so it is. 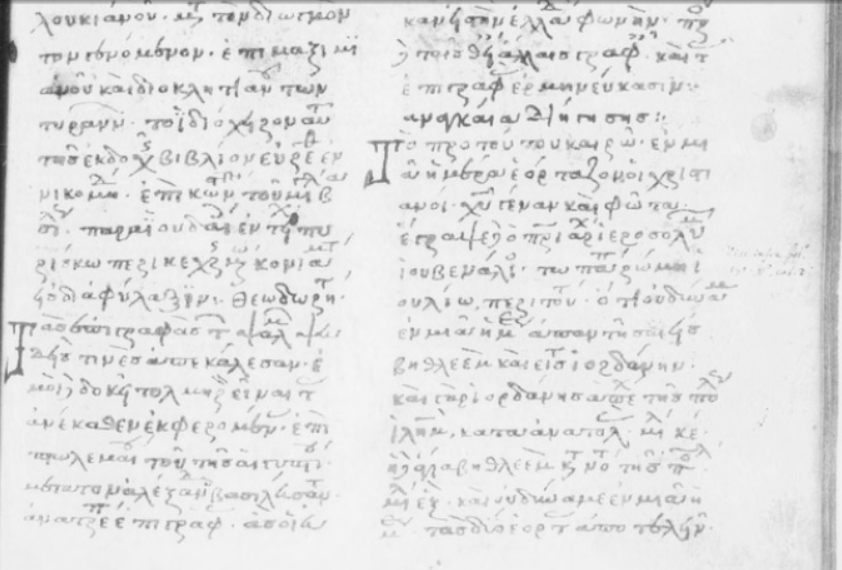 The header in the right-column is visible even in this reproduction, followed by the Greek text printed by Cotelier.

Sadly I can’t read the Greek text – my paleography is non-existent, and the image is poor – but Thompson says it is preceded by a note that attributes it to Juvenalis. (Edit: wrong – the text itself mentions Juvenalis; line 5 of the text after the header, at the start)

Other short pieces precede and follow it.  Here is the BNF online catalogue:

Note however that the catalogue actually fails to mention our piece, starting on fol. 120 recto.  (I have communicated this omission to the BNF).

The catalogue does make clear why our piece is here.  It relates the Hebrew months to the Roman months; so naturally follows on from the anonymous item on fol. 119v.

That’s about as far as we can take this.  It’s a revised item of the Pope Julius I story, in a 15th century manuscript, among a bunch of other short pieces.

I’ve uploaded the two pages of the manuscript here:

Does anybody with better paleography than me fancy transcribing the whole of our piece, starting at the top of folio 120 and continuing down to the next header in the right-hand column of the reverse of the page?

4 thoughts on “Cotelerius on Pope Julius and Cyril of Jerusalem”