Yesterday I mentioned the Homeromanteion.  This work consists of an introduction, followed by a list of oracular extracts from Homer.  Using three 6-sided dice, you can get a random extract.

The work is extant in three papyri, P.Bon. 3, P.Oxy. 3831, and PGM VII.  One of these, P.London 1, 121 is a six foot long roll.  It is mentioned in this excellent British Library Manuscripts blog post post, by Federica Micucci, which also gives this image of the end of it.  The three numerals are at the start of each line. 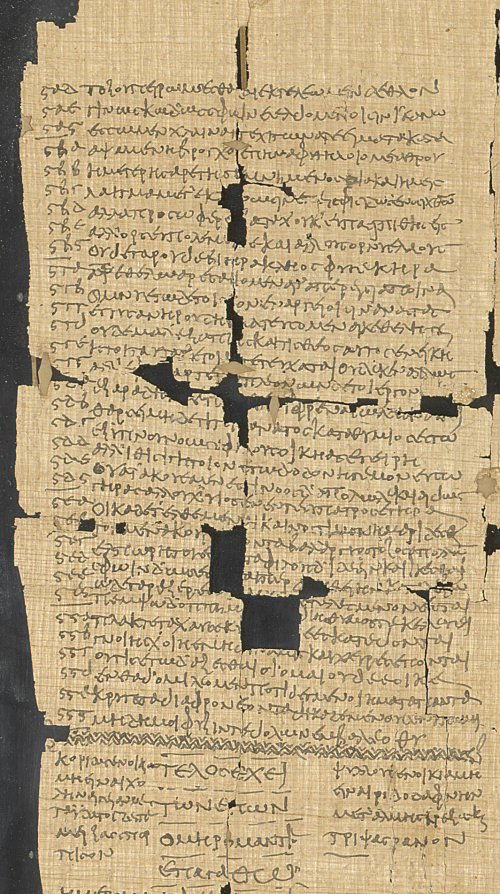 The end of the translation given in Betz, Greek Magical Papyri, PGM VII, is as follows: 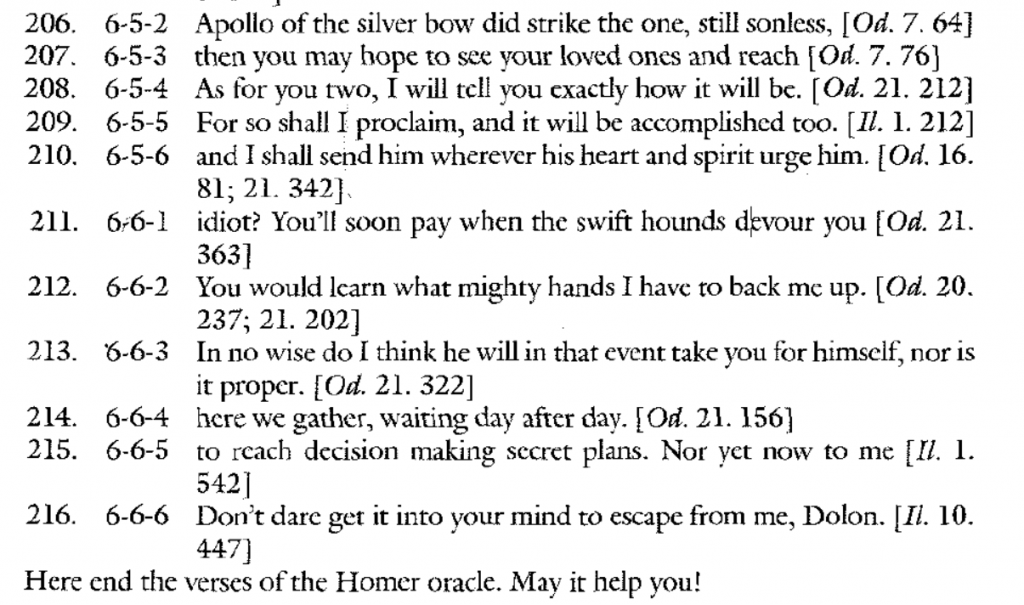 The left-most numbers are modern, as we can see.

I should have liked to give the instructions at the start of the work, but these were only preserved in P.Oxy. 3831.  There is a translation apparently by P.J. Parsons, in the original publication in The Oxyrhynchus Papyri, vol. 56 (1989), p.44-48, but this does not seem to be online.  The BL blog gives an extract:

First, you must know the days on which to use the Oracle; second, you must pray and speak the incantation of the god and pray inwardly for what you want; third, you must take the dice and throw it three times.

There is an excellent article by Raquel Martin-Hernandez – whose Academia.edu site contains a great deal of material about sortilege, the art of divining using dice – on using Homer for divination, with special reference to the Homeromanteion. It may be found here.

Similar methods could be used with biblical texts, of course; and so they duly were.  Both Augustine and Jerome refer to these, according to Martin-Hernandez, who gives two interesting footnotes:

[5] The use of the Bible for divination was not only conducted by secular people, but also by members of the clergy on the light of Canon 16 of the council of Vannes, dated to the 462 and 468 CE: aliquanti clerici student auguriis et sub nomine confictae religionis quas sanctorum sortes vocant…hoc quicumque clericus detectus fuerit vel consulere vel docere ab ecclesia habeatur extraneus. “Some clergy are devoted to the interpretation of signs, and under the label of what pretends to be religion, what they call Saints’ Lots…any cleric found either to have consulted or expounded this should be considered estranged from the church” (Concilia Galliae, A. 314-A. 506 [CCSL 148:156]). Text provided by Klingshirn 2005: 100. For the use of the Bible for divination see Klingshirn 2005.

In the decay of the church in the late 4th century, it is perhaps unsurprising that such superstitions should take hold.

They are not really very different from opening the bible at random; a practice not unknown even today.

2 thoughts on “More on the Homeromanteion”