Just to the south of the Serapeum, which stood on a hill, was a Greek stadium or hippdrome.  The temple overlooked it, and there was seating.  The following map by Judith McKenzie indicates the location (click to enlarge):[1] 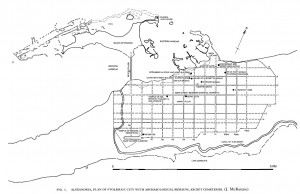 The area of the stadium was built over in the 19th century.  But it was still visible when the French army under Napoleon occupied the area, and so there is a plan, with notes, in the Description de l’Egypte, 5th vol. of plates, planche 39, as I learned from the splendid article by McKenzie &c.  So I went and searched for the original and here it is, although north is bottom left for some reason (again click on the image for full size):

The “grand colonne” at the bottom left is Pompey’s pillar – the pillar erected in the Serapeum by Diocletian.  The temple stood on that squareish plateau, with the 100 steps of the entrance descending to the left around where the pillar is.  The Arab “Chemin d’Alexandrie” (Alexandria road) runs to the east of the temple, along the Roman street.

The left hand end of the stadium, is marked with “ruins”, where a semi-circular wall is visible, mostly at the north and middle.  Distinct remains are visible at b-b-b.  The most recognisable remains are at a-a-a.

Notable in the picture is the “spina”, at c, the Roman centre structure in all their chariot-racing stadiums.  The Greek stadium is narrow, intended for foot races; so the spina would be a later addition.  But it was only just visible above the ground to Napoleon’s scholars.  It was about 1m above the floor of the arena.  At e was a hole for the meta, the cone-shaped turning post at the end of the spina.

At d is a portion of a stylobate, from a temple frieze, some 2.3m high, next to the steps of an “amphitheatre”.  Possibly part of the stadium was converted to a theatre at some point, as elsewhere.  At f were remains of columns.  At l the remains of a small obelisk.  At o is the exit from the circus, leading to the necropolis.

Pretty interesting, for a monument now vanished!  There is a book on the architecture of Alexandria, by the same Judith McKenzie, accessible in Google Books preview here, which includes material on the Lageion, and seems frankly very interesting by itself.

3 thoughts on “The stadium, hippodrome or “Lageion” of Ancient Alexandria”