By accident I came across an old exchange on Twitter, criticising a reconstruction of the vanished church of the holy apostles in Constantinople.  The church was demolished by the invading Ottomans.

The church was originally constructed by Constantine, with his mausoleum at the rear, and rebuilt by Justinian.  It was in the usual square cross shape, with four aisles, each with a dome on it, and a higher central dome. 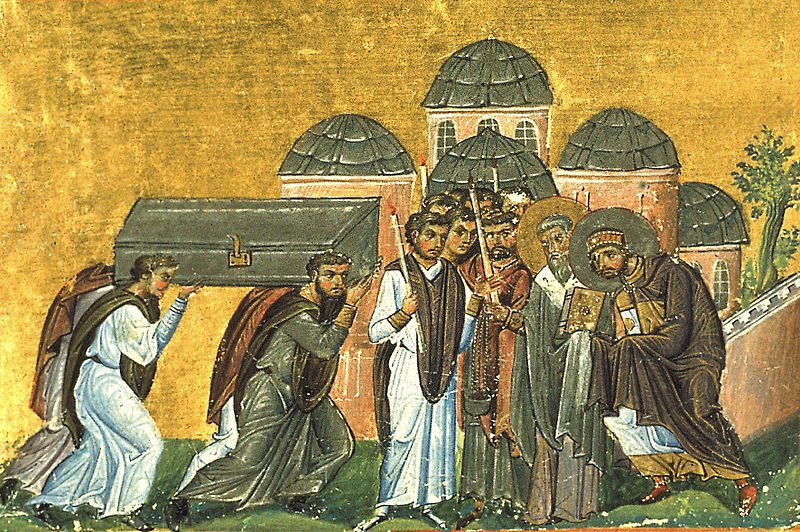 Note the tall domes, on a circular base pierced with windows.

The tweeter added images of churches following the same pattern: the church of San Marco in Venice:

These may be rather higher than those of the Holy Apostles were, although it is hard to say how accurate the painted depiction is.  And the church of St Anthony in Padua likewise has domes atop circular bases:

The tweet also referenced John Beckwith, Early Christian and Byzantine Art, 1986, p.222, to support the idea that the church was altered during the 10th century to raise the height of the domes:

Moreover, in spite of the lack of documentary sources the structure of the church of the Holy Apostles seems to have been thoroughly altered between 944 and 985. From representations of the church in the Menologion of Basil II (Vatican, gr. 1613) executed about 985 it appears that Justinian’s cupolas, of which four had been pendentive domes and only the central fifth had windows, were considerably modified.

In the Menologion all the domes are raised on drums pierced by windows, and the central dome is taller than the others. If the identification is correct, this form is confirmed by a miniature in two early-twelfth-century copies of the homilies of James of Kokkinobaphos (Vatican, gr. 1162, fol. 2; Paris, gr. 1208, fol. 3 verso [207]) showing a five-domed church with tall drums and windows and with the representation in one of the vaults of the Mission of the Apostles.

Now this scene is described by Nicolaos Mesarites shortly after 1200 as being in the central dome of Holy Apostles, and from his description, which is again incomplete, we learn that this decoration, though by and large conforming to the general pattern of the Twelve Feasts, was a great deal more complex than that described by Constantine of Rhodes. There were, for example, representations of St Matthew among the Syrians, St Luke preaching at Antioch, St Simon among the Persians and the Saracens, St Bartholomew preaching to the Armenians, and St Mark at Alexandria. Some of the scenes after the Resurrection are given in greater detail, such as the attempts of the priests to bribe the soldiers on guard at the Sepulchre and to suborn Pilate.

Whether this programme was worked out in the middle of the tenth century is difficult to confirm, but the church of the Holy Apostles was second only to Hagia Sophia in importance and more than once served as a model for other churches (in particular all three versions of S. Marco at Venice), and it continued to be the pantheon of the Byzantine Emperors until well into the eleventh century, the last Emperor to be buried there was Constantine VIII (d. 1028). The decoration of this church must always have been of prime importance. When the central dome collapsed after an earthquake in 1296, Andronicus II lost no time in rebuilding it.[10]

The claim that the domes were raised derives from Krautheimer’s Early Christian and Byzantine Architecture (many editions).  The claim was rejected by A.W. Epstein in “The rebuilding and redecoration of the Holy Apostles in Constantinople” (GRBS 23, 79-92, 1982; online here), mainly on the grounds of lack of evidence and the unreliability of manuscript decorations.

The original church raised by Justinian is clearly enough described by Procopius, as similar to that of Hagia Sophia but smaller, and likewise in the shape of a cross:[1]

That portion of the roof which is above the sanctuary, … is built, in the center at least, on a plan resembling that of the Church of Sophia, except that it is inferior to it in size. The arches, four in number, rise aloft and are bound together in the same manner and the circular drum which stands upon them is pierced by the windows, and the dome which arches above this seems to float in the air and not to rest upon solid masonry, though actually it is well supported. Thus, then, was the central portion of the roof constructed. And the arms of the building, which are four, … were roofed on the same plan as the central portion, but this one feature is lacking: underneath the domes the masonry is not pierced by windows.

There is a description written between 931-944 by Constantine of Rhodes, which I have just acquired, and need to read through.  It is full of flowery descriptions, so we’ll have to see what it actually contains!