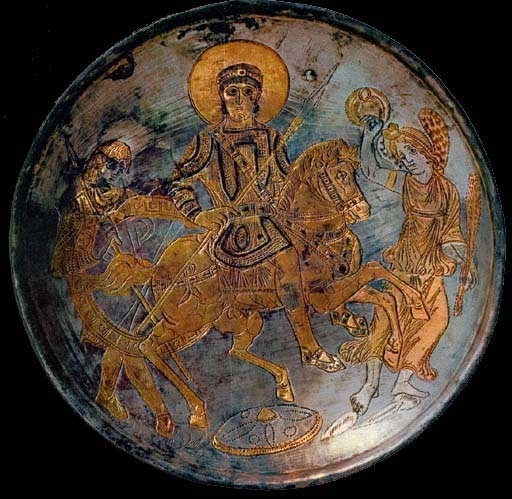 UPDATE: A commenter points out that the two dishes look suspiciously similar, allowing for photography differences.  There are 3 dishes; but are all these photos of the same item?!

As manuscripts of the Vatican come online, it becomes possible to look at items previously known to us only from poor-quality photographs.  This is a good thing.

Years ago I made an online edition of the Chronography of 354, an illustrated luxury manuscript made for a Roman aristocrat in 354 AD, and transmitted to us by copies.  The pictures exist in various versions, mostly derived from a Carolingian copy now lost.  The best set, in monochrome, are preserved in Vatican Ms. Barberini lat.2154 B.  Sadly the full colours of the ancient original are not preserved; but the renaissance artist did his best to copy the Carolingian original.

Here’s one of the illustrations, on folio 13, depicting Constantius II, in the uncharacteristic pose of money falling from his hand.  Somehow one suspects that this charmless man did look rather like this.  (It is a pity that, as with other Italian stuff put online, the image is defaced with a watermark screaming “mine! mine! mine!!”) 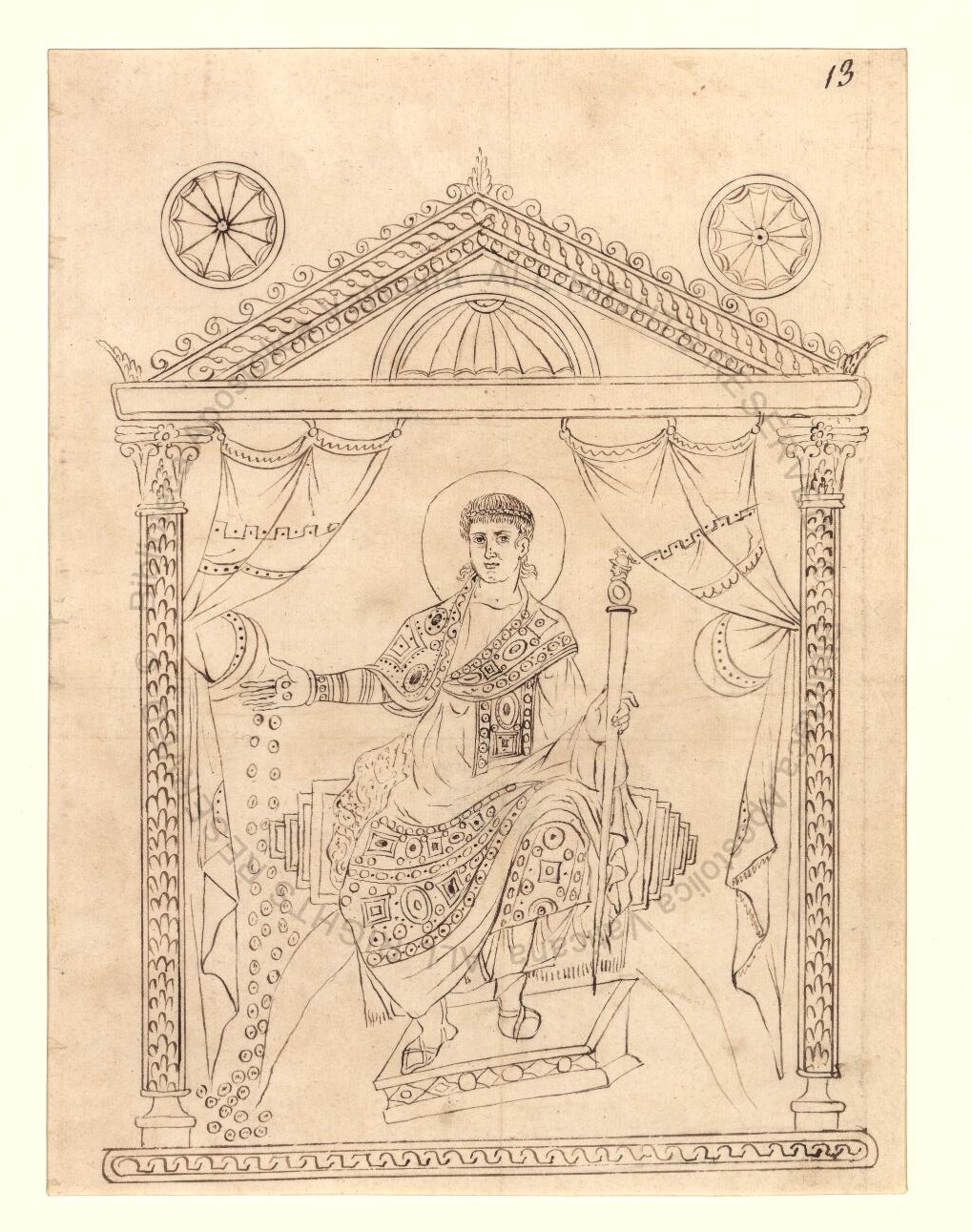 In 356, Constantius issued the following edict from Milan, one of a series issued in the west and prohibiting pagan sacrifices:

“If any persons should be proved to devote their attention to sacrifices or to worship images, We command that they shall be subjected to capital punishment.  Milan, in the 8th consulate of Constantius with Julian Caesar” 1

From two mentions in Libanius we learn that people at Antioch could not pray or offer sacrifice in public for the success of Julian the Apostate’s campaign against Constantius 2, although the accounts leave unclear whether this was because the object of the prayers was attempting to seize the throne, or just because pagan prayers were illegal.  Soon after 341, well before this:

[Aristophanes] came to what was left of our temples bringing no incense or victim, no burnt-offering or drink-offering — for that was not allowed.  But he brought a sorrowing heart and a voice of grief as he had just been crying or was about to cry.  He gazed on the ground, for it was a dangerous business to gaze up to heaven, and asked the gods to call a halt to the ruination of the world.3

The atmosphere of the reign of Constantius was clearly unfavourable to paganism. The general climate of fear that is so ably recorded in Ammianus Marcellinus will have discouraged anyone from doing anything that anyone else might denounce. It will also have encouraged officials to “show their loyalty” by taking informers seriously and harshly punishing those seen to violate the will of the emperor.

Yet in 357 the emperor made a visit to Rome, and the pagan Symmachus records the attitude of the emperor:

“He made no diminution in the privileges of the vestal virgins; he filled up the priesthoods with aristocrats; he did not refuse financial support for the Roman ceremonies; and following the delighted Senate through all the streets of the Eternal City, he gazed calmly at the temples, read the names of the gods inscribed on their facades, inquired about the dates of the buildings, and expressed admiration for their builders.” 4

The contradiction in the portrait of Constantius given in these two accounts is striking.  How is it to be explained?

One anachronism must be avoided.  The Roman empire was not a state like the modern USA, or UK, where the rule of law prevailed, and a government must pass a law to make its will effective.  It was a despotism, where the will of the emperor was the real law, and paper laws held a lesser status, if any.  Much the same position applies in black Africa today, where the “law” can be merely a piece of paper.  Real authority is the wishes of the “Big Man” who does as he pleases and may, if he chooses, enact a “law” to justify it.

Nor is this situation unknown in the west.  The ancient English law of blasphemy remained unused for 50 years, and was then invoked in 1977  after Gay News published a crudely blasphemous article about Christ.  At that time there was no support for the offender, and no demand for the law to be repealed.  But I remember how, after the trial, the establishment made it known that if the law was invoked again, it would be repealed.5   But in general laws in the west are either enforced or abolished.

The fact that Constantius issued an edict, therefore, need not have the significance that we would attribute to it today.  Unless the emperor chose to enforce it, it remained merely paper.  The imperial civil servants would know whether to take action or not.  In fact paganism remained legal, and even the religion of the state, throughout this period.  But what the edicts did do was to set a tone, to “chill” the expression and practise of paganism, to open the door to the extremist and the informer.  We are familiar today with the way in which “anti-hate” legislation has been deployed, not for use but for threat. Doubtless these edicts made clear in a similar way the general preferences of the government, and, in cases of doubt, which way the verdicts would go.  They made clear who was up, and who was down; who would be heard, and who would not.