The oracle of Apollo at Delphi was perhaps the most famous of the Greek oracles.  It was known throughout the Greek and Hellenistic world.  It continued to exist in Roman times, doubtless in a somewhat artificially preserved way.  But Apollo ceased to speak to men as Christianity took hold, just as the other oracles also fell silent. 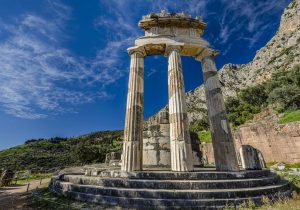 The last oracle delivered by the god has in fact come down to us. A messenger sent by Julian the Apostate returned with the following oracle.  Delivered in hexameters it reads:

Tell the emperor that the Daidalic hall has fallen.
No longer does Phoebus have his chamber, nor mantic laurel,
nor prophetic spring and the speaking water has been silenced.[1]

It is, perhaps, a plea for imperial patronage.  But the brevity of the reign of Julian doubtless precluded any such revival.  All the same, a law of 424 suggests that the games at Delphi were still being celebrated even then (Cod. Theodosianus 15.5.4), showing that at least some of the original institutions around the temple were still in being, a generation after the edict of Theodosius I which abolished paganism, in law at least.

The last oracle of Delphi was preserved in the Church History of Philostorgius the Arian, who died ca. 426 AD.  Philostorgius’ work itself has not survived, but it still existed, in twelve books and two volumes, when Photius reviewed it in his Myriobiblion in the 9th century.  Photius did more; he wrote an epitome of its contents which has reached us.  The modern GCS editor, Bidez, added to this fragments from various sources.

Philip Amidon has made a translation of this, assembled from various sources, and the full context is worth giving.  From book 7:

1b [AP 22].  When Julian had become master of the Roman Empire, as was said, his keenest desire was to restore paganism. He therefore sent letters to every place ordering that all haste and zeal should be applied to rebuilding the pagan temples and altars.

[AP 35: Artemius speaks to Julian]. Know therefore that the strength and power of Christ is invincible and unconquerable. You yourself are certainly convinced of this from the oracles that the physician and quaestor Oribasius recently brought you from the Apollo in Delphi. But I will repeat the oracle to you, whether you wish to hear it or not. It runs as follows:

Go tell the king the wondrous hall is fallen to the ground.
Now Phoebus has a cell no more, no laurel that foretells,
No talking spring; the water that once spoke is heard no more.

The edition of Bidez added fragments under each section of the epitome; these are taken from the 9th century Artemii Passio, the Martyrdom of St Artemius by John the Monk, which preserves sections of the text.[2]

The oracle is also preserved in the Byzantine historian, George Cedrenus.  It may be found on p.532 of volume 1 of the Bonn edition.  Sadly we still await the Australian translation of this useful work.

He sent Oribasius his doctor and quaestor to Delphi, to renew the oracle of Apollo.  When he arrived and began the work, he received this oracle from the demon: …

(Curiously the Latin translation of the oracle in the Bonn edition contains material at the start and end which is not in the Greek; perhaps Bekker, the editor, included a pre-existing paraphrase?)

Did the oracle speak again?  It would be rash to suppose that it did not.  But this is the last oracle known to us, and it speaks of the sanctuary fallen and the oracle silent.  However much the passing of superstition benefits mankind, to the antiquarian this is a melancholy picture.

10 thoughts on “The last oracle of Delphi”