7 For there are three that bear record in heaven, the Father, the Word, and the Holy Ghost: and these three are one.

8 And there are three that bear witness in earth, the Spirit, and the water, and the blood: and these three agree in one.

1 John 5:7, the Comma Johanneum, has disappeared from our modern bibles, and probably rightly.  It is not found in any Greek manuscript prior to 1500, and it seems to be a marginal comment that found its way into the Latin bible.  This text critical evidence tells us that it formed no part of the original Greek text[1].  Theologically it is usually assumed or presumed that any additions or changes to the original Greek text are the work of men, rather than God, and are therefore not legitimately part of the divinely inspired text.  So on neither count should it appear in our bibles.

However 1 John 5:7 still has its defenders today, and one of them wrote to me recently with an interesting query.  Michael Hollner had come across a defence of the authenticity of the passage written by a certain Ben David in 1825.  In this appears the claim that Theodore of Mopsuestia referenced 1 John 5:7.  Being an honest man, he wanted to know if this was actually true.

The pamphlet of 70 pages was entitled Three Letters Addressed to the Editor of The Quarterly Review, in which is Demonstrated the Genuineness of the Three Heavenly Witnesses – I John v. 7, and published in London.  “Ben David” was actually a unitarian minister named John Jones.[2] No doubt he felt that the high churchmen of the Quarterly Review might suspect a prank from a unitarian minister.

My correspondent’s quotation was itself corrupt and confusing.  It is always good policy to go to the original source, and so doing clarified much.

There is a digitised version of David’s pamphlet at Archive.org, and I have placed it here.  I think it is on Google Books; but I have not been able to locate it.  Here’s the passage: 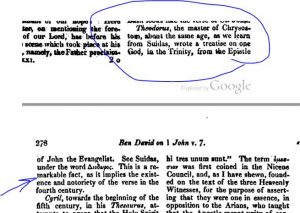 Theodorus, the master of Chrysostom and a contemporary of the emperor Julian, as we learn from Suidas, wrote “A Treatise on one God in the Trinity, from the Epistle of John the Evangelist” Eis ten Epistolen Ioannou tou Euaggelistou peri tou eis Theos en Triadi. This is a remarkable testimony, as it implies the existence and notoriety of the verse about the middle of the fourth century. At that period, a writer of celebrity erects upon it the doctrine of a trinity in unity; which surely he would hardly have done, if any suspicion of its authenticity had been entertained by him, or by any other person of that age. Besides, the turn of the expression, as it supposes what was grounded on the verse to be grounded also on the whole Epistle, supposes the Epistle and the verse, in respect to their purport and authenticity, to stand exactly on the same foundation. (See Suidas on the word Diodoros.)

A quick look at the Suda online (we do not refer to “Suidas” these days) shows that Ben David made an error; it is not “Theodorus”, i.e. Theodore of Mopsuestia, but Diodorus of Tarsus who is in question here.

Diodorus is a shadowy figure to us today, because all of his immense output has perished.  Fragments exist, and attempts have been made to collect them, with limited success.  But a list of works exists in the Suda, as Ben David rightly says, in section delta 1149.

Ben David’s claim, therefore, is that Diodorus of Tarsus wrote a work entitled On the epistle of the evangelist John concerning one God in three, which is listed under that title in the Suda  (The subsidiary claim, that this must then refer to 1 John 5:7 is not our concern here).  But did he?

Here is the entry from the Suda online, based on the Adler edition of the 1930s which is sadly inaccessible to me:

[sc. At first] a monk, [sc. but later] in the times of Julian and Valens[1] bishop of Tarsus of Cilicia. He wrote a variety of things, as Theodore Lector[2] says in his Ecclesiastical History. They are as follows: Interpretations on the entire Old Testament: Genesis, Exodus, and so forth; and On the Psalms; On the Four Books of the Kingdoms;[3] On Inquiries into the Books of Chronicles, On the Proverbs, What is the Difference between Exposition[4] and Allegory, On Ecclesiastes, On the Song of Songs, On the Prophets, Chronology, straightening out the error of Eusebius [the spiritual son] of Pamphilos[5] about the times, On the Four Gospels, On the Acts of the Apostles, On the Epistle of John the Evangelist, About the One God in Three, Against the Melchisedekites,[6] Against the Jews, About the Resurrection of the Dead, About the Soul against the Various Heresies Concerning It, Chapters to Gratian,[7] Against Astronomers and Astrologers and Fate, About the Sphere and the Seven Zones and of the Contrary Motion of the Stars, About Hipparchus'[8] Sphere, About Providence, Against Plato on God and the Gods, On Nature and Matter, in which is “What is the Just,” Concerning God and the Falsely Imagined Matter of the Greeks, That the Unseen Natures are not from the Elements but Were Made from Nothing along with the Elements, To the Philosopher Euphronius[9] by way of Question and Answer, Against Aristotle concerning Celestial Body, How Hot is the Sun, Against Those Who Say the Heaven is a Living Being, Concerning the Question of How the Creator is Forever but the Created is Not, How is there the Capacity to Will and to be Unwilling in the God who is Eternal, Against Porphyry[10] about Animals and Sacrifices.

But as we can instantly see, the Suda online edition introduces a comma, making two works where Ben David reads one.

Ben David is not making this up.  On the contrary, he is using a contemporary edition.  The Latin side of that does the same, as this image sent in by my correspondent makes plain: “In Epistolam Joannis evangelistae, de hoc quod unus est Deus in Trinitate”; but the Greek, note, has punctuation between the two.  It’s hard to say what edition Ben David used, of course – this is the Patrologia Graeca, reprinting an earlier edition. 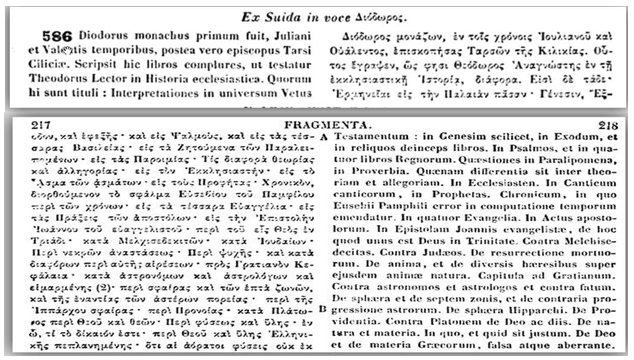 The Greek text is punctuated.  So the question then becomes… are the manuscripts punctuated?

Fortunately a 15th century manuscript is online, British Library Additional 11892.  The headwords are indicated by an initial red letter, although curiously the “diodoros” is not clear in the image – look at the left margin, line 2.  The relevant section is on folio 202r: 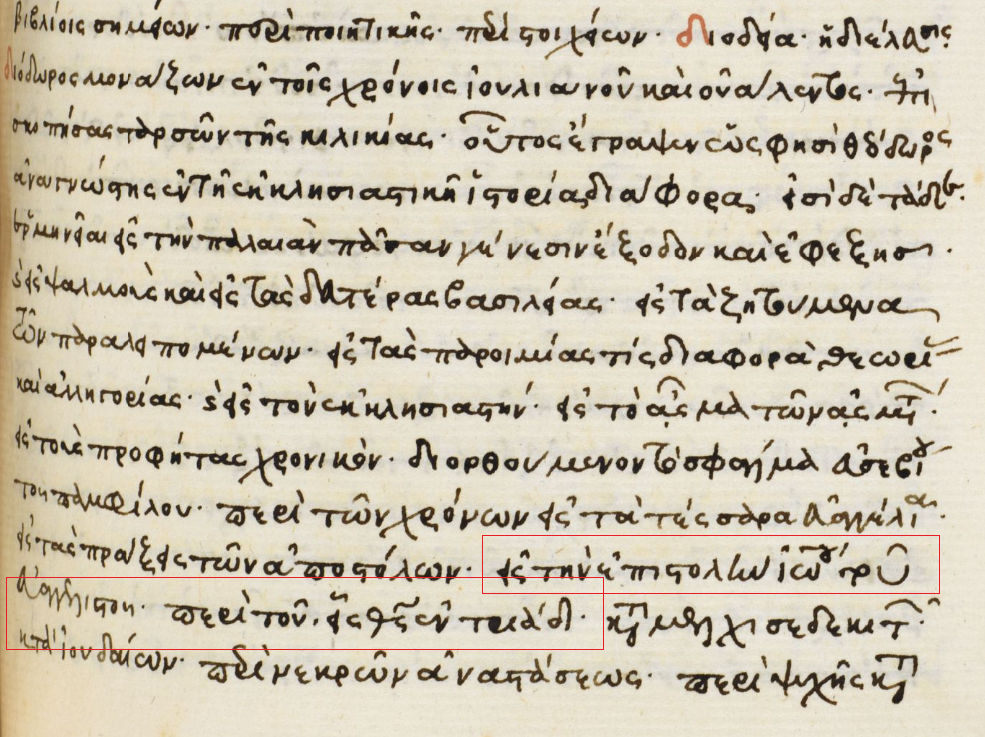 So we see… again it is punctuated.  These are two titles, not one.

The use of a single point as a divison mark is older than the 10th century, when the Suda was composed.  So there is little doubt that the author so punctuated his text.

Sadly for my friend, therefore, this particular argument fails.  The Suda does NOT say that Diodorus wrote a work on the epistle of John on one God in Trinity.

UPDATE: A kind gentleman has sent in the page of Adler’s edition.  Our bit is lines 10-11. 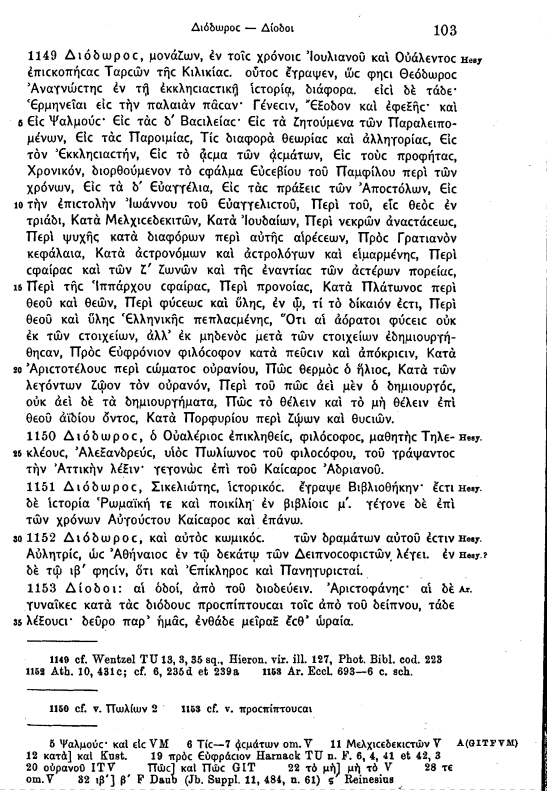 17 thoughts on “1 John 5:7 in the fourth century? Theodore, Diodorus, the Suda, and Byzantine punctuation”