A couple of weeks ago the story broke that archaeologists engaged in conservation work on the Palatine hill in Rome had discovered the remains of the rotating dining room built by Nero in his palace, and mentioned by Suetonius in his Lives of the Twelve Caesars  (Nero 31:2).

A few images from the web are here: 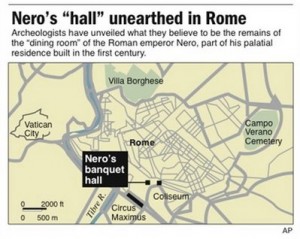 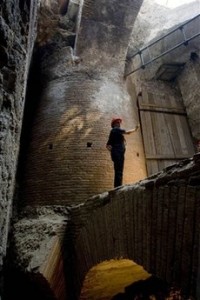 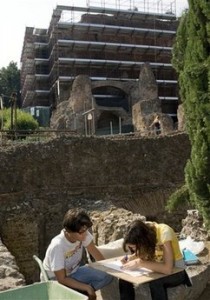 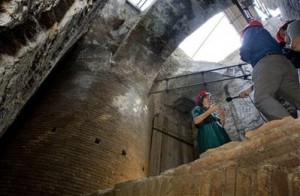 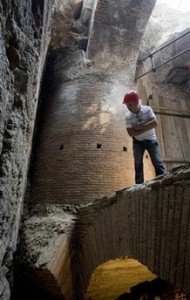 The story was reported by Associated Press (AP), the excellent photos by Domenico Stinellis.  A video is here.  The lead archaeologist was Francoise Villedieu.  Maria Antonietta Tomei, Rome’s archaeological superintendent is talking to reporters in the 4th photo.

Tomei is overseeing a project to shore up the hill that houses the villas of ancient Rome’s great. Architect Antonella Tomasello is leading the efforts while archaeologists like Francoise Villedieu, leader of the team that made Tuesday’s discovery, have taken the opportunity to make fresh digs. Rome’s commissioner for urgent archeological work, Roberto Cecchi, on Tuesday earmarked new funds to verify the hypothesis that the dig has indeed found Nero’s fabled dining room.

In Le Monde of 10 October 2009 there is the following which suggests that parts of the mechanism survive:

Discovery of a Neronian banquet hall. The remains of an impressive rotating banquet hall from the Emperor Nero, who reigned from 54 to 68 AD, have been unearthed on the Palatine hill, in Rome. The dig, supervised by architect Francoise Villedieu, “have allowed to identify rooms that might have been serving spaces, situated underneath the main room, as well as a part of the rotating mechanism of the floor,” the CNRS has revealed in a statement on October 7. “Without any parallel known to date, this mechanism constitutes a unique element of Roman architecture.

The Palatine is a warren of passages and rooms, into few of which we can go.  Let’s hope that there are more discoveries.