While reading James Hannam’s blog Quodlibeta I noticed this post, discussing the history of vivisection and dissection.  It references a rather bad-tempered post by atheist polemicist Richard Carrier here.

The nice thing in the discussion is to see ancient medical writers discussed and quoted.  James shows that the Hellenistic physicians Herophilus and Erasistratus carried out human vivisections in Alexandria, as witnessed by Celsus the 1st century medical author.  He rightly comments that we should not suppose that, just because we would find this appalling, an ancient would do so.  Martial’s epigrams describing things done to criminals in the arena make that plain enough.

I had never heard of Herophilus, still less that a edition of the fragments existed by Heinrich von Staten (Cambridge, 1989).  Religious controversy does unearth things that calmer debate would not, and we can all be enriched therevy.

Richard Carrier’s post is too long and too far outside my area of interest (and too unreferenced) for me to read much of it.  A couple of passages in it caught my eye accidentally.

He objected to a Christian saying “[The Christians] preserved and copied an enormous amount of Greek mathematics, technical writings, and natural philosophy.”  This unexceptionable statement apparently upset Dr. C, who met it with the objection that only a tiny percentage of ancient literature has survived.  I was unclear how this evidently true observation refuted the point made, however.  Surely both are true? 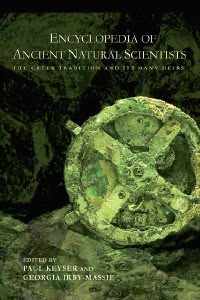 Much more interesting in the same part of the post was an image of a book cover attached, which proved to be that of Paul Keyser &c, Encyclopedia of Ancient Natural Scientists (here).  I had not heard of this book, but as regular readers will know I am rather an enthusiast for compedia of authors.  But at $360, who of us could buy a copy?  Keyser himself is interviewed here; he turns out to be a fellow software engineer, working for IBM, who has also produced Greek science of the hellenistic era on the basis that:

Science accounts for more of the texts surviving from antiquity than any other sort of writing, and yet is rarely studied or even read because the texts are relatively hard to find in translation.

Well said, sir!  How many of us are even familiar with the dusty volumes of ancient science, the 20-odd volumes of Galen, and the like?

I don’t pretend to be that interested in the history of science, so much of what was discussed was above my head.  But one element involved a curious misunderstanding.  Carrier barks repeatedly that the term “Dark Ages” is one that is being suppressed in our day, and being suppressed by the awful Christians, because they are trying to conceal how awful it was.

The attempts to remove the term from our language certainly exist, in our day, but I never heard that the Christians were responsible.  After all, whoever used any other term, before our own days?  On the contrary; most Christians I ever heard of think the middle ages was a period of degeneration in religion and everything else, and think of the poor conditions in the West during the Dark Ages, rather than the unknown splendours of Syriac and Arabic science.

The people who object to it seem primarily to be the medievalists.  Presumably professional pride influences this.  Indeed one medievalist has never spoken to me, ever since I queried a gross mis-characterisation of that wretched period of human existence.  Another, probably more influential group, seems to be the politically correct.  Why these object to it I do not know.

But what seems quite clear to me is that the dichotomy is not between Christian and heathen, but between those like myself who look at the Dark Ages as a time in which we would certainly not like to live, unlike antiquity; and those more interested in it who see things differently.

6 thoughts on “Dark ages, middle ages, and how it’s all the fault of the Christians”