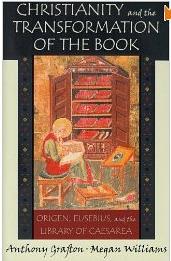 Wieland Wilker kindly sent me a copy of Anthony Grafton and Megan Williams, Christianity and the transformation of the book: Origen, Eusebius, and the Library of Caesarea.  This arrived on Friday, and I read through it over the weekend.

The first thing to strike me was the absence of footnotes.  That’s because they had all been banished to the end.  This habit of American publishers is a nuisance to the reader.  It necessitates flipping to and fro the end of the book.  Doing so is weary; consequently it is impossible to glance at the note while reading more than once or two.

The book also places two further difficulties in the way of the critical reader.

Firstly the numbering of the endnotes is broken up by chapter.  In order to find a note, therefore, I have to memorise both the endnote number (23) and the page on which it appears (15).

Secondly, once you have found your note, it will not infrequently have a reference in the form “BLOGGS, 1997, p.123”.  Now unless you have memorised the bibliography, this may not take you further forward.  To get an idea of which book is being referred to — a study?  an edition? a paper? — you must then locate the bibliography, hunt through that, then return to the note, reread that now you know what the book is, and then return to your place in the book.

It’s obvious why the book is so arranged; it is very convenient and concise for the author and publisher.  But it is rather a problem for the reader.  I wish that publishers in the US would avoid these habits.

But on to the book.  Grafton’s prose style is a fluid as ever and the book slips down easily.  The view expressed is that we all owe rather more to the innovations in book design required for the Hexapla of Origen and the Chronicle of Eusebius than is generally realised.  The argument is made well, and is one that I have long wished to hear made.  The description of the Hexapla is very clear, and I read it with deep attention, while cursing my inability to glance at the bottom of the page to see the footnotes and assess the data behind the claims.

The authors  also make the valuable point that Eusebius’ innovation of verbatim quotation was itself a useful innovation.  The links that Grafton makes with the activity of renaissance scholars are also useful and interesting.

Another very useful aspect of the book was how G&W related the activity of Origen, supported by the private sponsorship of Ambrose, to the way in which freelance teachers of philosophy operated in the period.  This must be the right approach to take, and such links must be illuminating.  A letter of Origen in which he describes how Ambrose kept Origen’s nose to the grindstone in his enthusiasm was new to me, and most interesting!

The plates are good, although the quality of images supplied by some of the institutions is risibly poor.  The book came out in 2006, at which time many manuscript libraries were waging a die-hard campaign to prevent access to their collections. I think really the page images need to be in colour, and there seems no reason technically not to do this now.

The content of the book is mainly an essay of interpretation.  To cover the ground, the authors reply mainly on the secondary literature and reflect the consensus of US-based scholarship without too much discussion.  The breadth of the topic necessitates some such approach, indeed.  This is handled well, and there is certainly a need for such books.  The translations that are given of some texts are fresh and readable.

But the approach also means that sometimes a view is expressed without any backing other than a scanty reference, if that.  Some of the views so skipped over are very controversial, as anything to do with christian origins tends to be.  Do we wish to be told, as fact, that the gnostics were Christians, for instance?  The apostles did not think so, the Christians did not think so, modern Christians do not think so.  This idea seems to me to reflect more the desire of the Selfish Generation to evade the moral teaching of Christianity than anything in the historical record.  But doubtless Dr. G and W just picked this nonsense up from their sources.  In view of the tendency of said Generation to promote daft ideas by incessant reiteration, we must always check whether some agenda is being promoted when we read stuff from US sources.

Another bit struck me as unintentionally funny.  At one point the book offers as fact the theory that Demetrius, the enemy of Origen, was in fact the first Bishop of Alexandria.  This contradicts the sources, which tell us of an episcopate beginning with St. Mark.  The idea that in fact Mark created some form of presbyterate, or whatever, is of course possible; but our sources do not say so.  But G&W treat this theory as fact, with the odd result that they are forced to describe the statement of Eusebius as “the conjectures of Eusebius”.  That is, the primary source written a century later around 100 miles away is “conjectures”, while a theory contradicted by the data written 2,000 years later by someone in a culture which possesses no more than 1% of the ancient literature is fact.   Really?  That seems quite unlikely to me!

When nonsense is offered as fact, and fact is described as conjecture, there is always a reason. To debunk the idea of a succession of bishops is a standard of anti-Catholic literature.  The agenda of those who control university appointments peeks through again.

We mustn’t pillory G&W for this sort of thing, tho.  This is what happens to any of us when we don’t stick close enough to the data, and spend too much time with the secondary literature.  Doubtless the authors repeated the stuff in good faith.

Overall verdict?  A useful book.  I imagine it is aimed at undergraduates.  It must raise the reputation of Origen and Eusebius in that audience, and also connect these authors with their late antique milieu.  Both objectives are praiseworthy.