I’ve been converting a load of Greek text into unicode using Greek transcoder with much success.   But I ran across a glitch.  Depending on the option chosen, the accents can all end up to one side!

The option responsible is this one, “Use composing characters”. 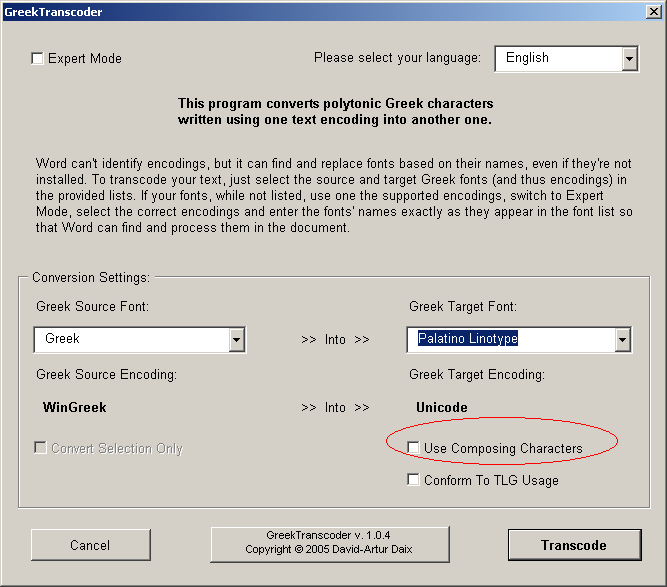 I checked that, and I should not have done; it caused off-centre accents.  But what on earth does it mean?

A hunt around the web reveals that you can do all those accents in one of two ways.  Firstly you can use a character that includes them all inside the character.  Alternatively you just type ‘alpha’ followed by the accents, and the browser and editor should render them all correctly as one letter with some accents on the top.    The former is called “using precomposed characters”; the latter “using composing characters”.  The latter does not work very well, as applications don’t support it.  This TLG PDF says more. 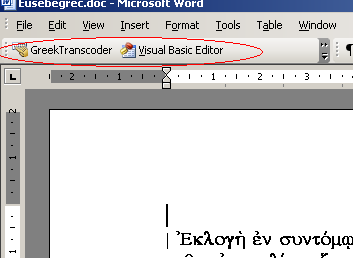 I’ve also noticed that on XP the WINWORD executable tends to hang around in memory after you exit a document.  If you copy the .dot files for Greek Transcoder into the Application Data\Microsoft\Word\Startup directory, they are only picked up when the WINWORD executable starts, so get ignored in this case.  I’ve had to manually terminate it to get the utility to appear.

Once it’s loaded, the buttons appear in Word.