Yesterday it became a criminal offence in the UK to express strong approval of some sections of the bible in public or to reproduce them on the internet, punishable by up to seven years imprisonment.  For instance: 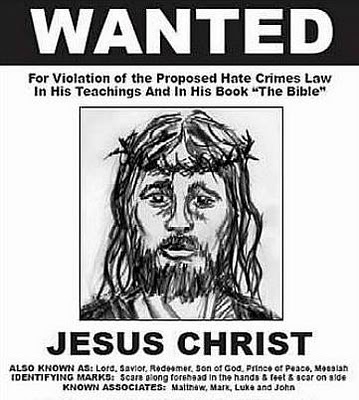 Thou shalt not lie with mankind, as with womankind: it is abomination (Lev 18:22).

If a man also lie with mankind, as he lieth with a woman, both of them have committed an abomination: they shall surely be put to death; their blood shall be upon them(Lev 20:13).

Do not be deceived: Neither the sexually immoral nor idolaters nor adulterers nor male prostitutes nor homosexual offenders nor thieves nor the greedy nor drunkards nor slanderers nor swindlers will inherit the kingdom of God (1Cor 6:9f).

Therefore God gave them over in the sinful desires of their hearts to sexual impurity for the degrading of their bodies with one another (Rom 1:24). *

As Cranmer (from whom I borrow the image) rightly observes:

Whatever one’s interpretation of the above scriptures, as of today it would be a bold preacher who so much as jokes about homosexuality.

Today is the appointed time by our wonderful Government for Section 74 of the Criminal Justice and Immigration Act 2008 to come into force. It creates the new offence of intentionally stirring up hatred on the grounds of sexual orientation.

It is not a matter of inciting violence or grievous bodily harm: there are already laws against that.

So it is now a crime to ‘intensely dislike’ homosexuality.

Or to ‘intensely dislike’ homosexuals.

Because the two are so easily confused in the mind of the victim (if not the perpetrator) that the mildest disapproval of the behaviour might be mistaken (or purposely distorted or misinterpreted) as vehement disapprobation to the extent that it becomes an irrational attack upon the person.

It is true that the Lords won an important ‘freedom of speech’ amendment, but it will exist only on paper. In practice, the culture will shift towards an auto-self-censorship: people will be so afraid of transgressing the law (or, worse still, of merely being accused of transgressing the law) that the jokes will subside, humour will diminish, drama will avoid the subject and real life will consequently be impoverished. Debates on sexuality will become taboo, not because of a statutory prohibition but because of an impediment to negativity, questioning, accusation and allegation.

Did you hear the one about the gay guy who…?

Call the police, report the crime.

And you can be very sure that the police will treat the allegations with the utmost urgency.

God forbid that Her Majesty’s Constabulary might be accused of being homophobic.

Not the slightest effort has been made to limit the effect of the legislation.  As one minister gloated, the churches had better start  hiring lawyers.  This too is intentional — Ezra Levant has documented the technique of “lawfare”, of “maximum disruption” where a campaigner is given a legal basis to make as many complaints as he likes, at no charge to himself, against others, to drag them through the courts for months and years, to force them to run up huge legal bills.

Normal people may wonder why the establishment is so desperate to force unnatural vice upon us all, to make it a norm, to force us all to speak politely about it.  But the answer may be found in Paul Kocher’s Master of Middle Earth, which studied the Lord of the Rings: “It is not enough for evil if its victims do as it wants; they must be forced to do it against their wills.”  It is the arrogance of power to choose some evil, detestable to almost everyone, and force all to bow down to it.

This is evil.  This is a piece of hate, passing laws to permit and encourage and foster attacks by one tiny well-organised section of the community on another which is quiet, law-abiding, and harmless.

It is specifically targetted at the churches.  Indeed we can be sure that the law was drafted by the gay lobbyists who intend to use it — there’s been enough in the press lately about the way in which Blair simply implemented the demands of Stonewall for some huge list of rights and privileges.

Some may say that this all has only a limited bearing on the gospel.  But so did sacrificing to Caesar; “a pinch of incense… what’s the harm in that?” asked the atheist Roman procurators.  It is a fingerprint.  It is intended as a test case.  Do you follow Christ, or Caesar?

How we oppose this evil I do not know.  That we can either oppose it together, or be picked off, one by one, seems certain to me.

* Cranmer also quotes a section of the Koran; but we can be sure that the Moslems are in no danger of interference!

8 thoughts on “When will the police come for me?”