Severian is famous — or infamous — because he compared the sky to a “tent” and then to a “pavilion” in his sermons on Genesis, e.g. in homily 1, 3:5.  I’ve been thinking about this.  A tent to us is a square thing, and the idea is outlandish.  But what did the word mean to Severian?  What is being said?

To find out, we need to see the Greek. 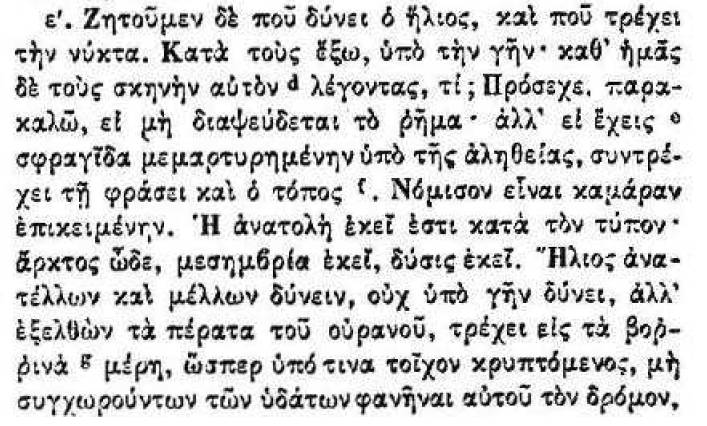 This I rendered from French as follows:

5. Let us now ask where the sun goes down, and where, during the night, it purses its course?  According to our adversaries, under the land; and we who look at the sky as a tent, what is our feeling on this?  Look and see, I beg you, whether we are in error, or whether the truth of our opinion appears clearly, and whether reality is in agreement with our hypothesis.  Imagine that above your head a pavilion has been set up.  East would be there, north here, south there and west there.  When the sun has left the East and starts to set, it will not set under the land; but crossing the limits of the sky, it traverses the northern areas where it is hidden by a kind of wall from our gaze, the upper waters concealing his journey from us; and, after having traversed these areas, it returns to the East. And where is the proof of this assertion?  In Ecclesiastes, an authentic and not interpolated work of Solomon: “The sun rises and the sun sets,” it is written there;  “while rising, it moves towards its setting, then it turns to the north;  it turns, it turns, and it rises again in its place.”  Eccl., i, 5.

The first word used — rendered “tent” by Bareille in his French translation — is σκηνή, which LSJ at Perseus give with a range of meanings.  The word “skene” is what we get “scene” from, in a theatrical sense, as in the stuff on the stage, referring to the wall at the back of the stage behind which things went on.

I. a covered place, a tent, Hdt., Soph., etc.: —in pl. a camp, Lat. castra, Aesch., Xen.
2. generally, a dwelling-place, house, temple, Eur.
II. a wooden stage for actors, Plat.:—in the regular theatre, the σκηνή was a wall at the back of the stage, with doors for entrance and exit; the stage (in our sense) was προσκήνιον or λογεῖον, the sides or wings παρασκήνια, and the wall under the stage, fronting the orchestra, ὑποσκήνια.
2. οἱ ἀπὸ σκηνῆς, the actors, players, Dem.
3. τὸ ἐπὶ σκηνῆς μέρος that which is actually represented on the stage, Arist.; τὰ ἀπὸ τῆς σκηνῆς (sc. ᾁσματα）, odes sung on the stage, id=Arist.
4. metaph. stage-effect, unreality, σκηνὴ πᾶς ὁ βίος “all the world’s a stage, ” Anth.
III. the tented cover, tilt of a wagon, Aesch., Xen.: also a bed-tester, Dem.
IV. an entertainment given in tents, a banquet, Xen.

There is quite a range of meanings in there, and there may be post-classical meanings that LSJ doesn’t have.  Is “tent” quite adequate?  Wouldn’t “covered area” be better?

The second word used is καμάραν — rendered “pavilion”.  This also has a range of meanings:

which all adds up to “something with a curved top”.  The LXX meaning in Is. 40.22 of “vault of heaven” is perhaps what is in mind here, conceived of as curved.

Cosmas Indicopleustes adopted the idea of Severian — which was speculation by the latter.  His model was a cube with a domed roof.  The fact that this meant the world had corners was no problem — on the contrary! — because the bible talks about the four corners of the world.  I haven’t read enough of Severian to find his reference to corners, but it looks as if this is the pattern here too.