When I was a boy I lived in Cyprus for two years.  This was before the division of the island after the Greek attempt at annexation in 1974.  I remember holidays in the east of the island, especially around the ruined Roman city of Salamis.

It was possible to camp in the ruins, to kick a ball against an ancient column.  The site was mostly unexcavated and stood on the sea.  An earthquake in antiquity had pushed much of the city under the waves, and so I recall shallow blue seas full of tumbled masonry.

The experience gave me a life-long appreciation of the reality of the ancient world.  Many people really don’t believe the ancient world is real; not really, not like modern times.  It was something far away and relatively unimportant, about which nothing can truly be known, so they feel.  I am one of the privileged few who have never thought this.

All this came back to me when I stumbled across a picture of Salamis today on a tour company website (Cyprus44).  It doesn’t seem to have changed a bit! 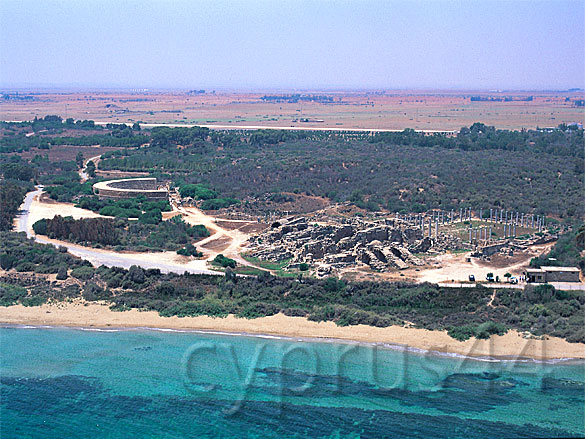 Salamis was originally a Greek city.  Cicero records in one of his letters how Republican tax-gatherers wanted a commission in the cavalry, and how one of them had beseiged the senate of Salamis in their own senate house, in pursuit of a debt (owed to Brutus) for so long that some had starved to death!  The ruins visible today are mainly Roman.

The city was wrecked in the 4th century by an earthquake, and the rebuilt city was renamed Constantia.  Epiphanius, author of the Panarion, was its bishop late in the century.  The city declined in the Byzantine period, and was abandoned after the Moslem conquest.  When a new city arose, at Famagusta, it was sited some miles to the south.

11 thoughts on “The ruins of Salamis in Cyprus”