Under the church of Santa Prisca in Rome is the remains of a Mithraeum.  It is notable because of an inscription somewhere in it, which is often supposed to refer to Mithras “saving” people “by the eternal blood”.  There seems to be more than a little doubt about whether it really does say this, tho.  The Mithraeum is full of frescos, all in glorious colour!

Obviously we could use a photograph.  So I was wondering where the inscription is.  Is it still in situ, I wonder?  Is it possible to visit the Mithraeum?  Or how else can one get a picture of the inscription?

This site suggests that it is, although it looks as if you have to make an appointment.  I’m not quite sure what that site is, tho.  But this site suggests it can arrange site visits to various unusual sites.  An Italian site gives slightly different info here.  I must admit I am tempted to go over to Rome for a couple of days and see what I can snap!

I did a Google images search for “Santa Prisca Mitreo”, and came up incidentally with this wonderful colour tauroctony (click on it to see it full size) from here, which is in fact from the Mithraeum at Marino, not the Santa Prisca one: 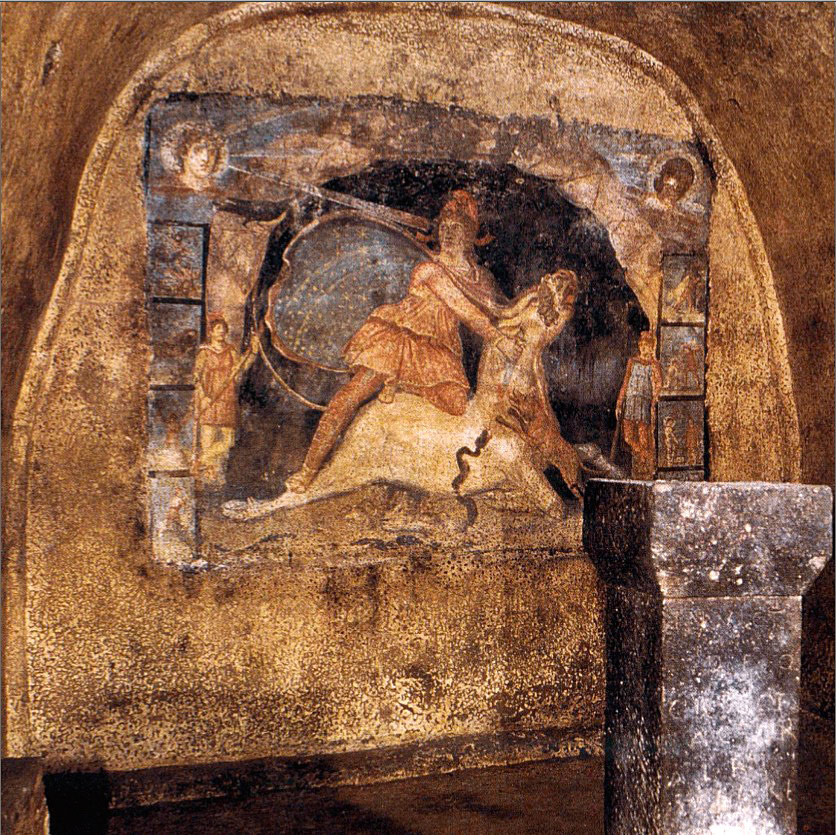 Fresco of Mithras from the Mithraeum at Marino

I’ve seen a few of these, so here are the standard elements.  Their real meaning, of course, is largely forgotten, but we can list the elements of the painting.

At the top left, the sun beams down rays, one ray striking Mithras.  Top right is the moon.  Mithras kneels on the bull and stabs it, and a dog and a snake leap up to lick the blood, and a scorpion grabs the bull’s balls.  In this case Mithras’s cloak is lined with stars.  The action takes place in a cavern.  The two attendants, Cautes and Cautopates appear on either side, one with the torch pointing up, one down.

A band of coloured images reciting the myth is on either side.  I can’t make out most of them, but on the right, from the top, #2 is the sun, Helios, kneeling to Mithras; #3 is the two shaking hands.   Those on the left ought to depict Mithras’ struggle with the bull.

4 thoughts on “The Santa Prisca Mithraeum in Rome”