In the Mithraeum under the church of Santa Prisca in Rome, there are a number of verses written on plaster around the walls, in between or above various images in the frescoes.  The frescoes themselves have been badly damaged, partly because of the poor quality of the material on which they were placed, but also because of intentional damage not later than 400 AD.

One of these verses has attracted wide attention.  It reads as follows:

The meaning is less than obvious:

Here too the ram runs in front, more strictly in line.
And you saved us after having shed the eternal blood.
I bring offerings so that the great power of Mithras may be shown.

Even Vermaseren is not sure whether this gibberish makes up one sentence or three independent sentences.  The middle line has been eagerly seized on by the headbangers, although the Mithraeum was constructed in 220 AD, and so is not evidence for any pre-Christian beliefs.

The inscription appears on the left-hand wall, at the top of the lower layer of frescoes.  The colour images sent to me by a reader and published in Mysteria Mithrae, appendix 1, are the best I have seen; far better than the wretched effort by Vermaseren.  Here’s the context in which those three lines appear: 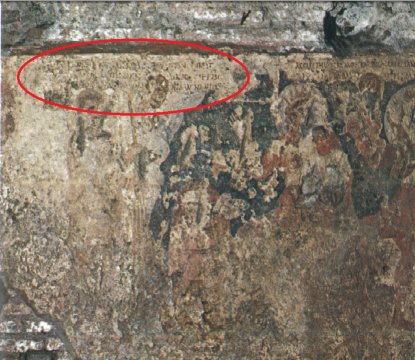 It should be immediately obvious that the wall is badly damaged.  Also some sort of graphic — is  that a head? — intrudes into the middle of the text.  Note the word “FUSO” – that last word in the crucial sentence is the clearest element we get.  Note also the next lines of the inscriptions, on the right.

Let’s add the diagram by Vermaseren:

And now the photograph.  Since this is long and thin, it’s in two halves; first the left, then the right.  Click on the images to get the full size.

Myself I would have thought that colour would be clearer, but  maybe not.  At all events, this is all we get.

Possibly more is visible on the wall than can be photographed.  But frankly… it’s not very good, is it?  How much of what Vermaseren read is imaginary?

7 thoughts on “Images from the Santa Prisca Mithraeum”