This press release (Google translate here) is rather unusual.  The Herzog August library in Wolfenbuttel hold quite a collection of manuscripts and rare books.  They’ve just introduced a new service to allow you to look at these, via a webcam, in real time.

What you do is book an appointment with the library to look at a book.  Then when you telephone, a library staff member holds the book under a camera, and the page image is sent via a web cam.  In this way you can tell him to go back/forward, look at this page/that one, and consult the book remotely.

The party identifies using the catalogue (http://www.hab.de/bibliothek/kataloge) the signatures and titles of the books he wants to see, and then agreed with the information provided by the library for an appointment (Tel: 05 331 / 808-312, E-mail auskunft@hab.de:). At the agreed time, he accesses the page on http://www.hab.de/bibliothek/sprechstunde and dials the number +49 (0) 5331/808- 118th

The library honestly admit — what some German libraries will not — that for a researcher to fly over from Australia or Japan to see if a book contains anything of interest is “hardly possible.”  This is an alternative.  The article includes an  image of what is happening, which illustrates the process. 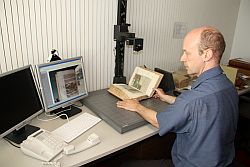 It is a very imaginative idea.   Well done Wolfenbuttel for thinking laterally on this one.

2 thoughts on “Wolfenbuttel do something original with manuscripts”