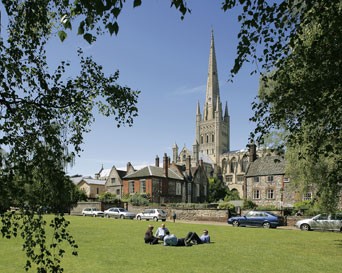 To Norwich this morning, mainly to escape my cleaning lady.  But I went into the cathedral library, where I knew that they had a 1696 edition of the works of Julian the Apostate.  This includes the text of Cyril of Alexandria, Contra Iulianum.

According to the Sources Chretiennes edition of books 1 and 2 (only), this edition was the source for Migne’s Patrologia Graeca text.  But you can never tell, unless you look.

In I went, accordingly, and asked to see the book.  The library was merged with a modern theology library some years ago, and closed to visitors.  The new librarian has made it into a rare books room.  This is rather a pity.  Sitting among the volumes in a library founded some centuries ago was a treat by itself.

Anyway out came the book, a massive folio volume in white leather.  As soon as I tried to use it, it became clear that no-one had opened it in years, if not decades or longer.  The spine was tight and stiff.  Indeed it looked like an original 17th century binding to me.  It was almost impossible to open more than about 30 degrees.

But the effort was worthwhile, because it revealed that this cannot be the source for the PG text.  The PG text prints the full text of books 1-10, which survive complete.  But there were certainly books 11-20 in antiquity, because people like John Damascene quote them!  In the PG, therefore, there is a meagre collection of fragments following book 10.  I know that there are Syriac fragments, and I would be surprised if there are not Arabic fragments too, and indeed Armenian ones.  For Julian’s book attacked the bible; Cyril’s reply necessarily defends it; and such comments must be of interest to catenists.  Cyril was such an important figure in monophysite Christianity, that we would expect his work to travel into those languages.

None of this extra material is present in the 1696.  Therefore Migne, for these items at least, used some other source.

It all goes to show that you cannot rely on what you read in even the best editions.  You must check.