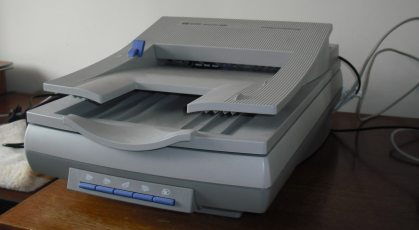 Old computers never die — they just get shoved to the back of the cupboard, and gather dust.  Old peripherals are much the same.

I thought it would be nice to put online a picture of my scanner.  Not the one I use today, but the one I bought more than 10 years ago, when I started getting serious about scanning material to place online.

In those days there were no PDF’s online.  What I used to do was travel up to Cambridge University Library, and photocopy whole books, at 7p a sheet.  I’d come back with a couple of inches of paper, and I would then feed them into this thing.  Or I’d take a book, borrowed by inter-library loan, away with me during the week.  One evening I would go to a Staples, and stand there for an hour while the copier whirred.  As I write this, I remember driving down past Gatwick airport to some such establishment, back in 2004.  I remember doing the same in Harlow in 2006.

The OCR technology of the day was primitive.  But the better quality scanner — I’d been using a $70 piece of rubbish before then — instantly reduced the number of corrections I had to make by hand.  The latter was always the slow part of OCR.  The sheet-feeder made it possible to run a book into the PC.

It’s a month short of 10 years ago that I bought it.  It has served me very well.   It’s the scanner that built the Tertullian Project, especially once I acquired Abbyy FineReader 5.0 and started getting good quality OCR results.

But I haven’t used it for a few years now.  It started to develop problems with the sheet-feeder, which left a vertical mark down the scanned page images and so made OCR more difficult.  The glass grew slightly scratched.  I was starting to do less OCR anyway.

Then I bought a Plustek OpticBook 3600, which was better for doing books.  But the death-knell was when I bought a Fuijtsu scanner with sheet feeder that took up a fraction of the space and was far faster.  I can’t remember where the SCSI card is any more.  All the Scanjet is doing is occupying space.  For years now I’ve used it as the place on which I stack my laptop when it’s not in use, which is a bit silly.

I think it is time to throw it away.  I’ll take it down the dump this afternoon.  I live in a small  house, after all.  It is of no use to anyone, after all, unless they have a SCSI card.  No-one does, these days — they were rare even back then.

But … it will be a wrench, somehow.  It’s like leaving a bit of yourself behind, something that helped define my identity for some of the most productive years of my life.

4 thoughts on “Sentimental about old technology”