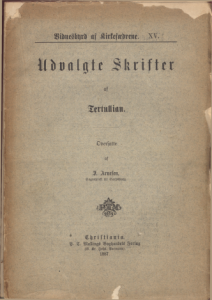 Ten years ago I was still scanning material for the Tertullian Project.  One thing that I started to do was acquire foreign-language translations.  In a way this was a mistake; it was quite hard to scan and proof these, and really those who speak that language group will be far better at it.  So after a while I stopped.  But I had by then acquired a fair collection of Tertullian translations.

These have languished in a  pile of books ever since.  Nor are they of value.  When I took a whole load of books to sell in Oxford, the dealer wouldn’t even look at the Italian translations.  These I ended up giving to Oxfam there, in the faint hope that they might find a reader.

One translation that I bought, in January 2001, was Tertullian: Udvalgte Skriften (=Selected Works).  This was a small collection of works by Tertullian in Norwegian translation, published in 1887.  It’s about small paperback size, and some 260 pages long.  Unfortunately when it arrived I found that it was in the ‘gothic’ font (or ‘Fraktur’) favoured in Germany up to WW2 and then deep-sixed by an edict from Hitler himself (or so I am told).  That meant that I couldn’t even OCR it.  OCR for Fraktur was developed eventually, in collaboration with Abbyy, the owners of Finereader, but then stitched up so that no-one could have access to it.

I found the book again a couple of weeks ago, when I pulled all my academic books out of the cupboard and piled them on the side.  I felt morally obliged to create a digital copy, and today I’ve done so.  It’s just a PDF full of page images, but at least it exists.  So … if you speak Norwegian, and can read text in Fraktur, enjoy!

The PDF is now online at Archive.org, here.

Would anyone like the book itself?  It’s unbound, and coming apart a bit, but everything is there.  It cost me around 110 Norwegian Kronor.  It’s yours for $10 by Paypal, plus whatever postage costs to wherever you are.  If not, I think I know a Norwegian scholar who would probably give it a home.

The book is volume 15 in a series.  The volumes were listed inside the back cover.  I can’t even read the letters but these seem to be the texts. 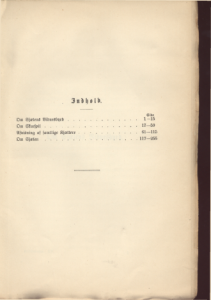 I see the word “subscriptionen” so I suspect there were more.  But who would know?

Is there a norseman in the house?

2 thoughts on “Tertullian in Norwegian”