Several people have sent me a link to the Bryn Mawr review of Muriel Debié (ed.), L’historiographie syriaque, published in Études syriaques.  This discusses how historical writing went into the Syriac world, how it changed, how it was influenced by Armenian texts, and what the effect of the Moslem conquest was — which was to isolate it from the mediterranean world, ca. 720.  The review (by Daniel King) is very enticing!  A few snippets:

This latest instalment, on Syriac historiography, succeeds in bringing together some of the foremost scholars in the field, often writing on the very texts they themselves have edited or translated. Authors and titles are listed at the end of the review. 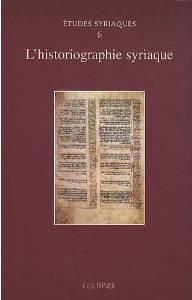 The extent to which literature written in Syriac partook of the Hellenic cultural baggage of late antiquity is still only faintly understood, and even less appreciated, by historians of the Eastern Mediterranean. It is the principal achievement of this excellent and useful volume not only to have provided students and specialists alike with an overview of the subject at the current state of research, but also to have highlighted the lines of transmission that carried Greek historiography into Syriac (and thence Arabic). The point is both to indicate how well integrated was the latter within the cultures of the late antique Empire, and moreover to describe the transformation these forms underwent in their ‘Oriental’ afterlives.

We are rightly warned of too easily viewing the Miaphysite (West Syriac) historiography as the expression of a will to ecclesiastical independence – as late as Jacob of Edessa (d.710) the (Greek) universal ecclesia remained the dream of these historians. Yet around 720 a major break seems to have occurred and here, at the moment when Syriac historians cease to note the names of Emperors and Patriarchs and begin to date events according to caliphal years, we can glimpse that self-conscious break from the Hellenic tradition that constitutes the final fracture between East and West. Up to this point, the Fertile Crescent had remained part of a classical (Mediterranean) world.

An example of just this process, the Chronicle of Zuqnin (written in 775), is the subject of the next chapter, again written by the text’s most recent translator. This contributor helpfully surveys the arguments surrounding the authorship and sources of the chronicle, reaffirming his judgment that Joshua the Stylite was its author.

The Syriac and Arabic literature of the Eastern Churches remains one of those disciplines in which ancient and mediaeval texts, sometimes of some importance, are still regularly found in previously unexplored manuscript libraries. The next chronicle to be considered is just such a case. The Muhtasar al-Ahbar al-Bi‘iyya was first identified in Iraq in the 1980s, one of many Arabic manuscripts from the monastery of Notre Dame des Semences (Alqosh) later transferred to the Chaldaean monastery in Baghdad. They are now, since 2008, back in Alqosh for safe keeping. Hermann Teule provides an overview of this as yet little considered work which bares a close resemblance to the better known Chronicle of Seert but which is also an independent witness to the events it describes. Among the sources explicitly mentioned by the writer are a number known from catalogues of Syriac authors but whose work has hitherto been unknown.

The book is rounded off with a bibliography of editions and translations of all Syriac chronicles, organized by type and tradition (East or West), making the whole a handy instrumentum for the student or non-specialist.

All this sounds most interesting, and I would love to read it.  But how does someone like myself ever get to read such a volume?  It is, admittedly, not that expensive by comparison with the predatory pricing from Brill these days — only 35 euros.  But still…

UPDATE: I have just found the website for the French Societe d’etudes Syriaques, which lists the series Études syriaques.  There are 6 volumes, and they all seem to be of wide interest.

I want copies of them all!  Remarkably the volumes are issued annually free if you are a member of the society.

UPDATE2: OK, I shall try an old-fashioned inter-library loan for the Historiographie volume.  That will loan me it for 2 weeks.  But really I’d rather have a PDF!