I’ve been trying to enter corrections to the Coptic section of my book.  Unfortunately all I got from the translator was *paper* corrections.  I don’t know the Coptic alphabet.  Worse still, I’m working with Bohairic, using the Alphabetum unicode font, rather than the commoner Sahidic unicode fonts.  What am I to do?

Luckily we live in the age of the web.  Here’s what I have done.

Firstly, look at the Wikipedia Coptic alphabet page.  This has a really useful table, which shows and names all the letters with images.  But it also has two columns which actually use a unicode font.  Naturally these appear as squares, invalid characters. 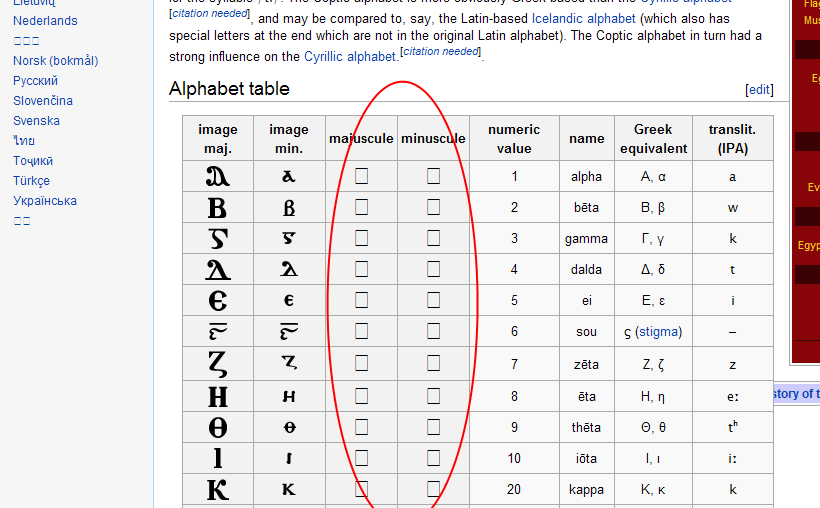 So what I did then was copy and paste the whole table into a Word document.  The unicode characters remained invalid, mostly — hey, my default font is Times New Roman and it doesn’t contain these.

Then I selected the two columns in Word and changed the font to Alphabetum.  And … magically I got a whole load of Coptic unicode characters, all labelled, displayed at 18pt: 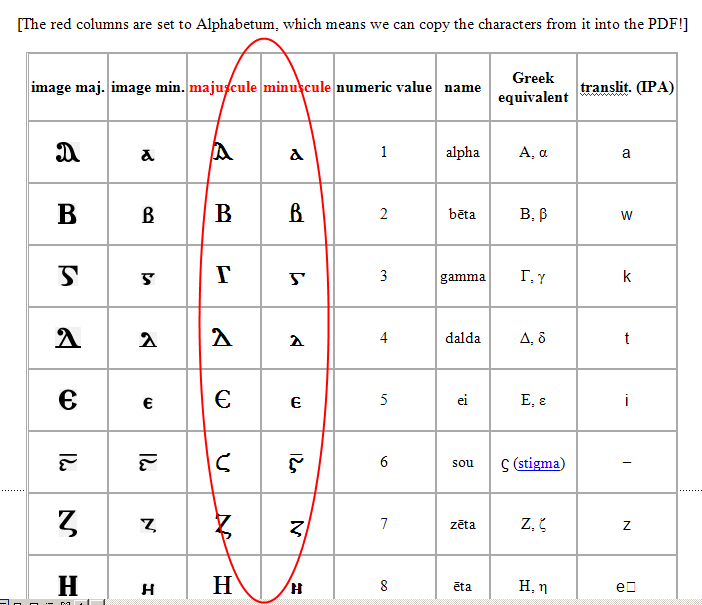 Now what I can do is use these characters, and just copy and paste them, one by one.  Yes, I still don’t know the alphabet.  But I can compare the letter types against the images, against the word document.  For small amounts of Coptic, it works.

It would work for Sahidic as well, of course — just use a different font than Alphabetum.

But … the translator talks about “supralinear strokes” whatever these may be.  The Wikipedia article is silent on these.

I have found a page on Coptic unicode input that does discuss these things.  You can enter any unicode character using charmap.  So:

Here are the choices made for the punctuation and diacritics used in modern printing of Coptic texts:

Combining diacritics (codepoints applied after that of the character they modify):

It is easier to enter Coptic Unicode characters if one has a customized keyboard, but it is also possible to enter any four-digit hexadecimal codepoint that you know using particular utilities in Mac OS X or Windows. … In Word for Windows, you can type a four-digit code (or a five-digit code) directly into your document and then type ALT-x, which converts the code to the character.

And there we are.

The same page also gives a Coptic unicode keyboard for Windows XP, but that’s for people who know what they are doing.