A few weeks ago I wrote of my discovery that a bunch of ancient astrological texts existed in an largely unknown English translation by Robert Schmidt of Project Hindsight.  These can be obtained by emailing the site and sending money by Paypal (a price list is here, but prices are actually more flexible than the flat $45 per booklet).  A table of contents for each volume is on the site (e.g. Antiochus of Athens is here).

These translations have remained unknown.  I cannot check l’Année Philologique, but I don’t know that they have ever received an academic review.  COPAC, the UK union catalogue for research libraries, did not reveal a single copy in any of them.   They were originally sold on a subscription basis to interested people in the astrological community, and so did not circulate more widely. 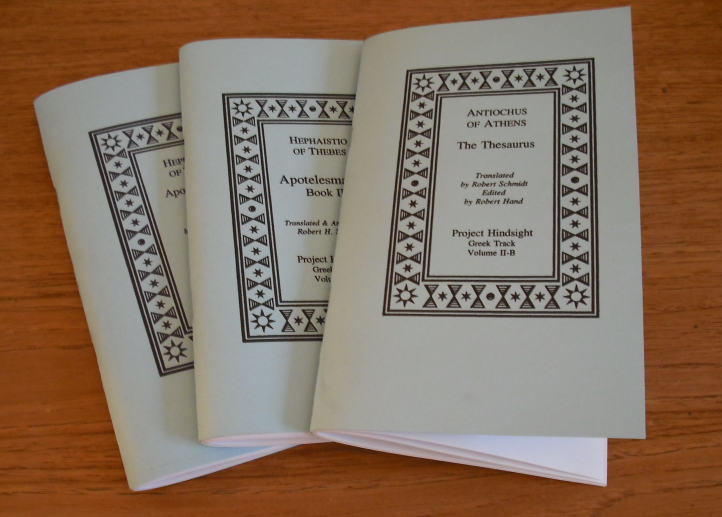 Now I’m not very interested in ancient astrological texts.  The existence of astrology and astrologers in our own times is something of a curiosity.  I have found those I have dealt with to be rather civilised folk, somewhat gun-shy and afraid of being taken for cranks and cultists when they write.

It was important to get rid of astrology so that astronomy could be born.  But since they are so harmless, we may see these people, and their interest in the astrological tradition, as a genuine survival from ancient times.  It’s a part of our own day that would be thoroughly comprehensible to a Roman.  It’s as if the worship of Apollo lingered in some mountain fastness; wrong, no doubt, but of great historical interest.  This has led me to take an interest in the matter, and perhaps to write more than I might otherwise have done.

I believe that all ancient literature should be accessible to anyone who wants to click on a link.  At the very least, it should be easy for people to find out about them!  So I invested some of my own money and obtained three volumes from the series; Antiochus of Athens, The Thesaurus; and Hephaistio of Thebes, Apotelesmatics vols.1 and 2.  I was warned that these were not of professional quality, that they were reprints, perhaps even photocopies, and that this was why they are not widely advertised.

A package arrived this morning from the US.  On opening it, I found three A5 booklets, a card cover, bound as a single-quire with two staples in the spine holding the quire together.  My first impression was positive.  The text is typeset professionally, the tone is calm and sensible, and the introduction by Robert Schmidt a model of professionalism. 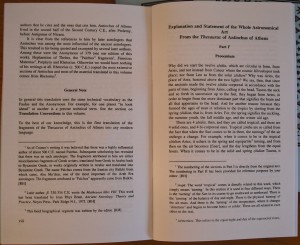 I attach a couple of photographs.  You should be able to click through on these to the full-size images.  Unfortunately it is rather dim here today, and I am never that handy with a camera taking images of pages anyway.

The volumes, as far as book production is concerned, seem to me to be perfectly acceptable and nothing to be ashamed of.  A few of the pages betray the odd mark indicating that a photocopier has been involved — the odd dust speck, the odd hair.  But all of us have photocopies of that kind!  The text is always perfectly clear and readable with none of the blodges that you get from photocopying old paper.

The prices are rather high, it must be said at once.  But you can haggle.  The team at Project Hindsight have reprints on the shelf of some of the volumes, which they are willing to let go at a discount.

The introduction to the Antiochus by Robert Schmidt is a model of how this should be done.  He indicates his sources, he states what text he is translating, and he gives an appendix indicating how he has translated specific technical terms.  The additional editorial work and notes by Robert Hand also look good.

This issue of technical terminology is a real one, which must obstruct all progress in this field until a specialist lexicon is compiled.   Mark Riley, while working on Vettius Valens, did start compiling such a lexicon, and he has placed his notes online.  It is interesting that Robert Schmidt has found the same need, and I could wish that the Project should place online a digest of how these terms were rendered.  In fact Dr Schmidt might be well advised to publish an article in some technical journal on this very subject.

A number of volumes of Vettius Valens are in the Project Hindsight list.  It seems that Dr Riley and Dr Schmidt worked independently, neither aware of the other.  But the result is probably of benefit to everyone.

Robert Schmidt is now reworking his translations, with the benefit of 17 years experience, into a new series of hardbacks, again to be sold on subscription.  We must all wish this enterprise well, and I hope  that the translator reaps a handsome financial reward, for his efforts have benefitted mankind to an extraordinary degree.

I wish I knew how to get some of the major libraries here to subscribe, for it is clear to me that these volumes need to be held in research libraries, and will otherwise be very hard of access.  Anyone any ideas?

One thought on “The Project Hindsight translations of ancient astrological texts”