Home, to find a red card on the mat.  Even since the advent of Amazon, these have been regular sights when I came home at night, and I thought non-UK readers might be interested to see these common yet ephemeral items. 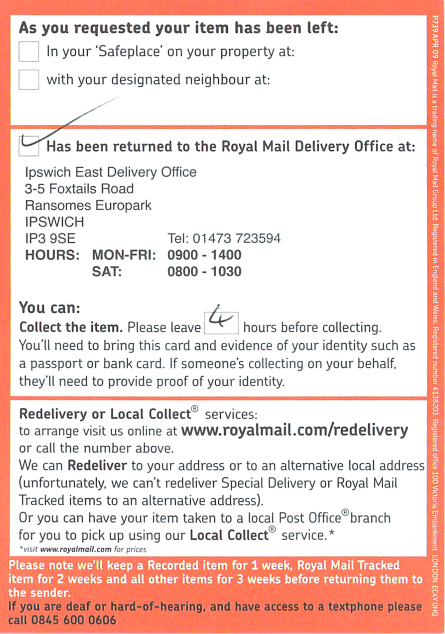 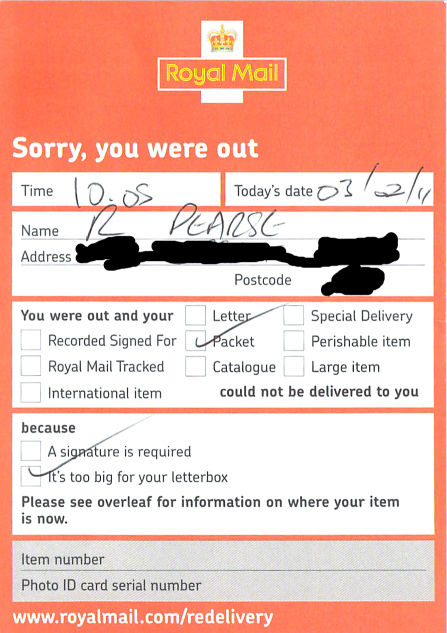 OK, they tried to deliver at 10:05 am.  Naturally I was at work then, like everyone else.  But I knew they would, and I expected to go and pick it up from the depot.

Unfortunately the card tells me — this bit is new — that I can only do so between 9am and 2pm.  That more or less makes it impossible, because, like everyone else, I am at work then.

This is yet another degradation of service from the Royal Mail.   The sorting office used to be open into the evenings, so you could pick up undelivered mail, such as Amazon deliveries.    Then they decided not to open after 2pm — the posties naturally want to go home early –, but they did open from 7am.    This made sense — the posties are supposed to be up early, so why not?   But no longer.   I’ve also heard rumours that Royal Mail wants to charge people to collect the mail from the sorting office.

If you wanted to stop people shopping online, what else would you do?  But why would a postal service want to do that?   So no more home deliveries for me.  I’ll try sending stuff to work, but this can be hazardous at many workplaces.  And why did it take them four days to try to deliver it?

What Amazon need to do is start their own delivery business, I suspect.  How long will it take before they do?

UPDATE:   I went to collect my mail this morning and was told that the postman had simply used an old card!  Apparently I could have collected my mail yesterday morning at 7am if I had wanted to (and I did want to).  I was also told that Royal Mail, in fact, is extending hours, not curtailing them.  That is good news!

13 thoughts on “Does Royal Mail have a death-wish? Apparently not.”