Bright sun and blue sky this morning, and little or no wind.   My cleaning lady came in at 8:30, and therefore I went out.  For if I remain, she talks (and talks) but doesn’t get on with the job.

I drove up to Norwich and pottered around in the sunshine.  I went into the Castle Mall shopping centre and had a baked potato.  I was amused to see attached to the food court what looked like a uPVC conservatory furnished as a sort of chapel, with a sign saying that weddings could be booked there.  I’m not sure who wants to get married in the food court of a shopping centre, tho.  Possibly it’s something to do, while waiting (and waiting) for service at the Burger King?

But after that I decided not to come straight back.  Instead I took the A47 down towards Great Yarmouth.

I never go that way.  I don’t know that I have ever gone down that road.  But I found there was something incredibly cheering about driving in the sun down roads that I have never been before, to places I have never seen before.  The joy of the open road and places new is real, it seems.  When we find ourselves shut up in ourselves, perhaps we should consider whether what we need is some fresh scenes!

I found myself at Caister-on-Sea, where one of the Roman forts of the Saxon Shore is visible — or its foundations anyway, in a little field or park.  Only part of the wall of the fort, as far as the gateway, plus a building with hypocaust, is visible.  The rest must be under the houses next door.

Then I drove down to Yarmouth.  Coming down the hill from a bridge, I saw a remarkable picture: 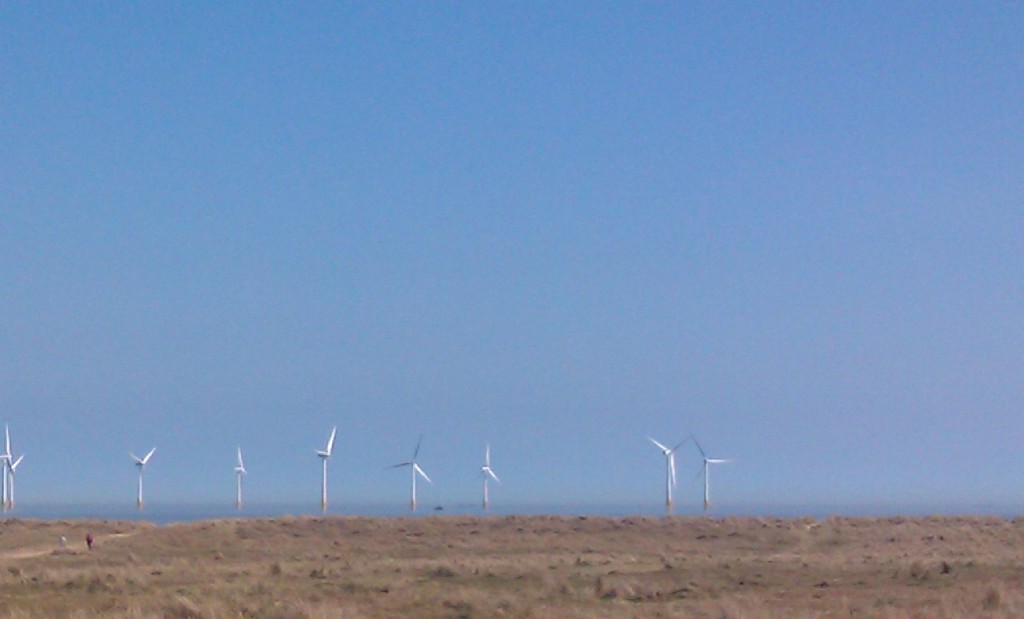 The day was hot, and I had my air-conditioning on. But there was no wind, and the giant fans were stationary, generating not a millwatt of power.   The scene was beautiful, for once.

I drove along the seafront at Yarmouth, a pleasure resort designed for the lower classes, or so I infer from what I saw.  Then I headed south towards home, and found myself on a dual-carriageway passing Gorleston and going towards Lowestoft.  The road was unknown, I knew not what lay ahead, and all the things that clamour for attention in my head were silent.

Half-hidden by a bush, I spotted a sign for Burgh Castle. I remembered, hazily, that this too was a Roman fort of the Saxon Shore.  Some considerable weaving around suburbs later, I came to the great field on the banks of the river Yare where three of the four the walls of the fort yet stand to a great height.

Two of the drum-shaped towers are visible in the above, the second one being the corner.  The gap at the left is the site of the gateway into the fort.

There’s nothing inside the fort.  One wall has fallen into the river, as the bank eroded.  Sixteen centuries of frost and rain have caused splits in the masonry.  Yet still it stands.

In the fourth century there was a considerable vicus or settlement outside the walls.  There is no trace of it now.  But not far away from the walls, to the right, across a field, stands a church, built before 1000 AD with a circular stone tower.  It may stand on the site of an earlier wooden church.  The name “burgh” tells us that the site was active in Saxon times anyway, when the fort was no doubt one of the more defensible places on the exposed east coast.

I took quite a few pictures, but they do not really give an adequate impression of the place.  While stood inside the gateway, I managed to get another visitor — an extremely nervous-looking man in office dress — to take a picture of myself.  When we look back on old photographs, it is not the pictures of walls and castles that we seek, but pictures of our younger selves.  There are few photographs of me, so I thought I’d get one more made.

After that, sadly, it was home time.  Another hour brought me back.  As I came onto familiar roads, the cares and concerns all returned.  I stopped seeing the road any more, and started thinking about this or that which needed attention.  I got back at 15:50.

2 thoughts on “From my diary”