OK you chaps.  Enough of poring over a grimy Illiad, men.  We have important news.

Bettany Hughes, the pin-up of the pre-socratics, has a new TV programme out.  It’s called Atlantis: the evidence.  And very nice she looks in it too.  Lots of stuff about Thera and the Minoans, although I don’t think she puts on a Minoan costume, sadly. 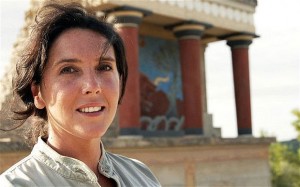 Refreshingly, she doesn’t slag off the popular ideas about Atlantis.  Yes, they’re mistaken; but wisely she sees them rather as a bridge to ordinary people, a way in which people like us will be attracted to the study of antiquity and drawn into the fascinating subject.

Is it any wonder that I adore her?