Do you remember the old TV series, Up Pompeii?  Possibly not.  It hasn’t been shown in many, many years.  It was a hit before most people reading this were born.  There was also a film version, from which the image (left) is taken. 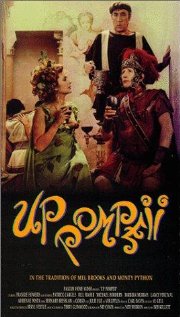 The comedy — or farce, for such it was — was set in Roman times, with a bunch of actors pretending to be Romans, and the whole thing really just a setup for a series of smutty jokes of the kind told 50 years ago, and which have not worn well today.

Similarly there was a US stage show, A funny thing happened on the way to the forum, of much the same vintage and, I fear, much the same quality.

But could such a show be made today?  And if so, what would it look like?

The broad, lazy farce style would have to go.  I doubt a single gag could be reused.  The episodes would have to tell a story.  But surely, surely, this is essentially a sit-com?  If The Big Bang Theory, set in a roomful of young physicists, can work, something similarly organised would work, set in ancient Rome.

But there is clearly a market for light fiction set in Roman times.  The ‘Falco’ detective novels of Lindsay Davis prove this, where the characters all speak as if they were moderns, but live in ancient Rome.

The main character, the humorous slave Lurcio, on whom “the heat and burden of the action fell”, would need to be a sharp modern comic — something like Frank Skinner used to be.  But surely that is possible?

It seems to me that modern TV producers are missing a trick.  There is a sit-com here, ready to be made.

4 thoughts on “Is there room for a remake of “Up Pompeii”?”