Today I had the chance to look for ten minutes at volume one of Vermaseren’s Corpus Inscriptionum et Monumentorum Religionis Mithriacae (CIMRM).  The second volume was inaccessible, unfortunately.  The two volumes apparently parallel the two volumes in Cumont’s Textes et Monumentes, so I infer that the second volume may contain literary references.

Vermaseren arranged his collection of inscriptions geographically, and started with eastern parts — some coins from Bactria, in fact, although these were clearly of Persian Mitra to my eye.  There was but a single entry for Cilicia, which was a bronze aes of the reign of Gordian III, ca. 240 AD (CIMRM 27).

What struck me, profoundly, was that the vast majority of the book was devoted to finds from Rome itself.  Vermaseren stated that he wanted to begin the book with Asia, as that was where the cult originated (or so he thought).  But the impression made, looking at those entries, was of a cult originating elsewhere, and that the material in Asia was distinctly peripheral to it.  Just holding the pages for each area revealed a cult whose archaeology was overwhelmingly western.

All this reminded me of many a confident statement online.  E.g.

“It was in Tarsus that the Mysteries of Mithras had originated” — Timothy Freke and Peter Gandy, 1999, from here.

“Now Tarsus was one of the chief seats of Mithraism” — Roy Wood Sellers, from here.

“David Ulansey holds (or rather speculates) that, in the late 2nd-century BCE, a group of Stoics in the city of Tarsus originated Mithraism.” — from here.

And yet … all we have to support such a claim, from the archaeology, is a single coin?

Searching for an image of the medallion online, I encountered the image of a coin of Gordian III from Tarsus, here at Numismatics.org.  The coin also has a deity wrestling a bull on the reverse — probably Mithras.  It is a great blessing to have so many images of coins online, indeed.  The images are: 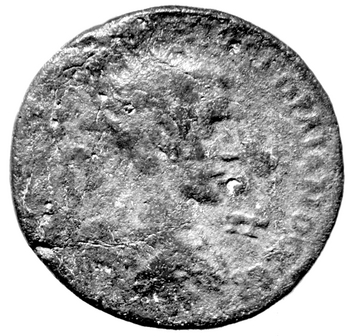 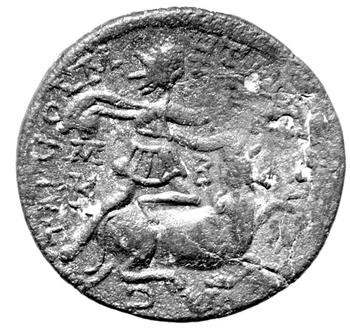 Here is the image of what is perhaps the same item, given by Cumont in The Mysteries of Mithra, p.201 (from here – click on the image below for a larger version): 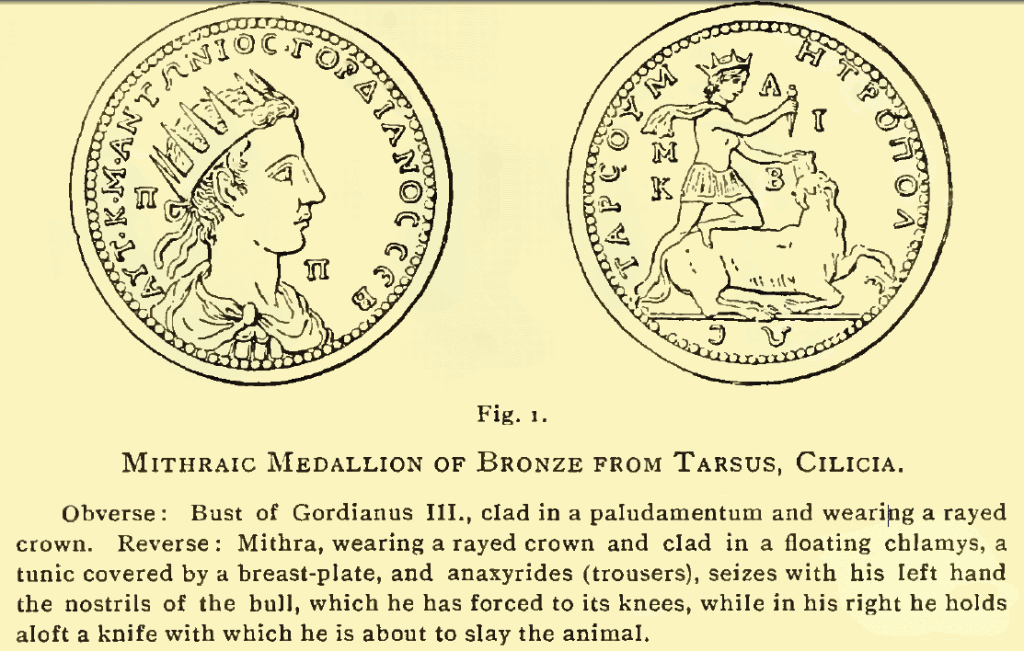 All this is not much, tho.

We do have the statement of Plutarch in his Life of Pompey that the Cilician pirates in 68 BC worshipped Mithras.  But probably the eastern deity is meant, linking the pirates with older enemies of the Romans like Mithradates.  But equally we may not be able to rely on the statement at all.

And that, it seems, is all the evidence we have about Mithras and Tarsus.

Enough to say that Tarsus was a major cult centre?  It seems unlikely.

8 thoughts on “Mithras in Tarsus”