I forgot to mention that at breakfast I found myself in the queue, and talking to a chap who, like myself, wasn’t wearing his name badge (the name badges this year were excellently readable).  It turned out to be Mark DelCogliano, who has translated a number of the prefaces to books of the Vulgate and also done an academic translation of Eusebius, De Pascha for a volume of papers which has just appeared and which I need to get and read.  Currently he is doing a translation of some of the homilies of Gregory the Great Basil of Caesarea for the St. Vladimir Press, and most of those homilies have never been translated before.  It was great to meet him.

The system of having meals together is a very important part of the conference, and was the main reason why I endured the discomfort of Queen’s College Annex.

After that, I checked out of my room and took my luggage to the lodge.  Curiously their locked room for heavy luggage is down two flights of narrow stairs!  Someone at Queens needs to think about that, just a bit. 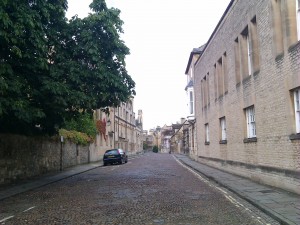 Then I wandered off into Oxford.  Today it was damp and hot, but overcast, and there were few people around.  It was around 9am.  I walked down to the Eastgate Hotel and verified the presence of a usable-size car park there, for future reference.  The rack rates were extortionate, but the staff as good as told me that they were all negotiable.  Doubtless in reality you book through some agent and pay 50% of it.

Then I walked along Merton Street — such a contrast to the noisy High Street.  I walked through my old college, Merton, to the gardens, out to the turret on the wall where Tolkien used to sit, and where I remember that we once held a bible study on a sunny day.  Then down to the Rose Lane Annex, looking unchanged, and then to Grove and out again.  The college grounds were immaculate, and I reflected again on how lucky I was to have spent four happy years there.

Alas! The ranks of the Grecians of my time may stand still, yet we are not what we were.  Some have been shaken or defeated by the shock of the years, or unexpected illness, and all of us, I fear, have had to give up the ambitions of youth in the daily effort to make a living.  Few were wealthy or well-connected, and most had no real idea of what to do next.  Many have ended up in dead-end jobs such as computer programming, wondering what happened, and even unable to marry for lack of suitable people whom men of intelligence and humour could sensibly marry.  “Is this all there is?” some ask, wondering what meaning their life has.  Alas, for such is the lot of men.

I have been very fortunate to be able to return to Oxford at a conference such as this, where everyone is friendly, a smile will be returned, and everyone you meet will be doing something interesting, and be able to tell you about it and to hear about your own work.  It is always the people that make the place.  Indeed, once the conference was over, I was just a solitary man again wandering around a strange town. 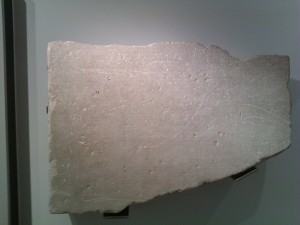 The Parian Marble – a Greek Chronology

I walked down to the river, and then back up St Aldates, along Cornmarket, to the Ashmolean Museum.  I had heard good things of this last night.  Blessedly, admission is free.  Even more blessedly, they allow photography, so long as you don’t use flash.  My mobile phone has a 5mp camera in it.

Most interesting of the exhibits was a block of stone labelled the “Parian Marble”.   As you can see from the photograph, the script on it is barely visible.  Yet it is, in fact, a Greek chronology, and the oldest known, according to the note on display.  The earliest entries are mythical, but it would be interesting to compare this with Eusebius’ Chronicle.

A very dramatic bust of Trajan was present, in the form of a cast. 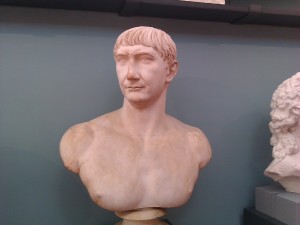 Another couple of items, also casts, caught my eye.  The first was a tauroctony — quite a small one, cast from an item in the Museum of London, and dated to the third century AD. 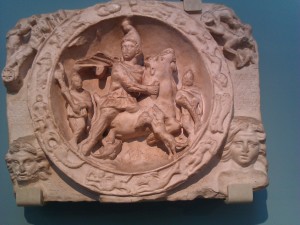 Mithras is surrounded by the zodiac.  Top left is the sun, top right is the moon, while two of the winds fill the lower corners.  The writing indicates that it was dedicated in fulfilment of a vow by a veteran named Ulpius Silvanus, who became an initiate at Arausio (modern Orange).

Another item is probably from a tomb, and depicts a butcher at work, while his wife keeps the accounts in a little codex.  It dates from about 125-150 AD.  Here it is:

I’ll include a close-up of the book.  I had read that businessmen in the early Principate used notebooks made of papyrus leaves, but this is the first example I had seen.  But this might also be an example of a wooden codex with wax pages, that could be reused.

You can click on any of these images to get a full size image.

After that, I quickly tired of walking around alone, and made my way back to the college.  I retrieved it, and got them to call a taxi (A1 Taxis, 01865-248-000), which turned out to be a real taxi rather than a minicab and which whisked me quite cheaply back to where I had left my car.  And then, dear reader, I drove home.

What a week it has been!  It was with great trepidation and stomach cramps that I set out on Wednesday.  The cramps, I suspect, were really caused by the stress of getting ill when I wanted to be in Oxford.  Then the difficulties on arrival and with the accomodation, and the stress of setting up the stall and so forth.

But it has been tremendous.  I have enjoyed being here, and would not have missed it for the world.  The papers were, if anything, rather better than last time.  The presence of graduate students with a need to impress — to find posts — meant that even these had made a considerable effort.

I’ve grumbled quite a bit about some of the admin things, not least because they are hard on a man who is not that well, and not that young any more.  But these must be taken in perspective, and much of the organisation was actually rather better than in previous conferences.  The conference itself is the thing, and it is a great joy to attend.  To leave is like leaving home.

UPDATE: Fixed description of what Mark DelCogliano is working on.