Some time back I discovered that in 1956 the US government commissioned a translation of the great history of medicine by the medieval Arabic writer Ibn Abi Usaibia.  The translation completed by Arabist Lothar Kopf in Israel, was filed, and forgotten.  I discovered that it existed quite by accident when I was doing a Google search for something — anything — on this author.  It’s almost certainly public domain as well.

Yesterday, to my astonishment, a DVD with photographs of all the pages of the typescript appeared through my letter box.  The photographs were taken by Douglas Galbi, who read my notes about this on my blog, hied down to the US National Library of Medicine to take a look, and — we should all thank him! — did the back-breaking task of photographing the whole lot! 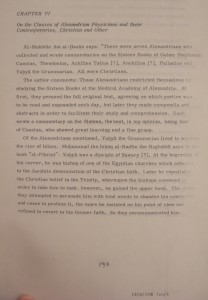 Looking at the images — which are better than I would have managed! — I grew rather excited.  A very large proportion of the material covers the classical and patristic period.  The translation is obviously a very sound piece of work, as you can tell at once by reading it.  This is a text that begs to be online.

I converted these into 7 PDF’s — the translation is almost 1,000 pages — and have sent a copy to Adam McCollum, Librarian of the Hill Monastic Manuscript Library.  Adam is an excellent Arabist, and interested in the author.  He’s promised to take a look and verify the general standard of the translation, and also whether it includes all the material in the Arabic text.

Meanwhile we really need something other than a gigabyte of PDF’s.  I was in negotiation with the NLM for a copy, and we’ll see where that goes.  In a sense it’s unnecessary now; but something monochrome and rather smaller might still be useful.

I’ve also posted a job on PeoplePerHour.com to see if I can hire some data entry skills.  I’m offering 40 GBP for 100 pages.  I did look at OCR, but OCR software tends not to like typescript, and the number of errors was sufficiently high that I’d rather someone else corrected it.  Alas, the days when I could do such things myself seem to be gone, and I just do not have the time.

UPDATE: I have modified the job, which has yet to be submitted, hours later.  It looks as if no-one on PeoplePerHour works at the weekend!  The delay is rather unwelcome, but useful in this case.  Because I have tried OCR again, and got rather better results.  The images that I first tried at the start of the book were not as good as those later on.  This book is OCR-able, so I have revised the ad with that in mind.  Eight hours at £5 an hour ought to cover quite a lot of OCR proof correction.  Although I do have a memory of once trying to hire people, long ago, and being disappointed at how slow they were.  Hum.  Maybe I will do this after all.

5 thoughts on “Getting Ibn Abi Usaibia into electronic form”