Another item I spotted via AWOL is that the British Museum (upon whom be blessings) has made its database of what it holds available on the web.  You can search it here, and an advanced search is here.

The database is updated weekly. The range of the Museum’s collection includes: …

Work is continuing on the parts of the collection that have not been catalogued and new entries are continuously being added.

They’ve also implemented some kind of webservice, so you can access it programmatically.  I haven’t looked at the latter — too much like what I’m doing at work at the moment.

I tried using the search, and entered ‘Mithras’.  I got back quite a lot of interesting items; but these were drowned in dozens and dozens of coin images.  Quite how the coins were relevant I did not see, and I can see that these will drown out all the other content.  Gentlemen: you need to implement an option to exclude coins!

Another useful feature would be a permalink for each item, and also a way to embed the photos (because most of us would not want to copy them).  The link “use digital image” is very good, very comprehensive, and allows the museum to sell reproductions to libraries etc, without obstructing the ordinary man who wouldn’t buy one in a million years.  Well done, whoever thought of this.

Here’s one interesting item, which I think we might say gives pretty much everything you’d want.  The date of the item is 200 AD.  I wish I had the CIMRM here, so I could identify it.

Bronze tablet dedicated to Sextus Pompeius Maximus, chief priest of the cult of Mithras and president of a guild of ferrymen; given by fellow priests of Mithras. Above the text are a bust of Mithras with a sacrificial knife and a patera.

“Dedicated to Sextus Pompeius Maximus, son of Sextus, High Priest of the Sun God, Mithras, all powerful, and Father of Fathers, President of the Guild of Master Ferrymen. We, Priests of the all powerful Sun God, Mithras, do this on account of the high regard and affection we hold for him and his worthy deeds. He has this for ever.”

Translating “invictus” as “all powerful” is interesting, isn’t it?  This chap was the high priest in his day.  Also note how the priests of Mithras do NOT call themselves “patres” but “sacerdotes”.

The image is here, and I reproduce it below: 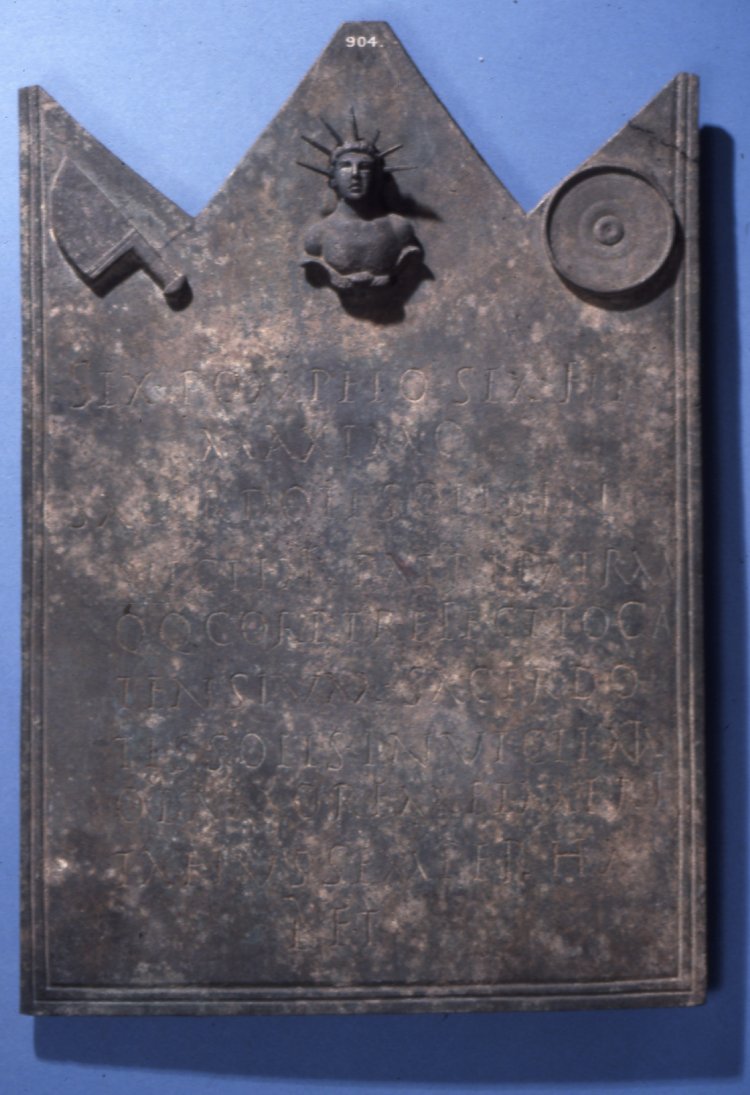 Notice how Mithras is NOT depicted in a typical fashion, but rather face forwards with a radiate crown.  If you or I were devising such an image, we would have had a tauroctony, wouldn’t we?  Indeed without the inscription, would any of us recognise this as Mithras?

Possibly the workshop adapted an existing image type, of course.  But otherwise it is a salutary reminder that our assumptions on iconography can be widely mistaken.

The other items are a bowl and a hatchet.  I wonder if these are part of the priest’s tools.  If so, we might ask what a priest of Mithras would use them for?  Do these suggest some form of sacrifices?