Quite by accident I came across the daunting opus by Steven Hijmans, Sol: the sun in the art and religions of Rome, 2009, in which he attempts to classify all the material about “Sol” in the historical record.  I must say at once that the book is partially impenetrable to those not deeply involved in iconography.

But it seems that Dr Hijmans’ interest originally was sparked by the controversial 2nd century mosaic[1], which is often supposed to show Christ as Helios.  I found an image online, which I include below on a useful site about St. Peters. 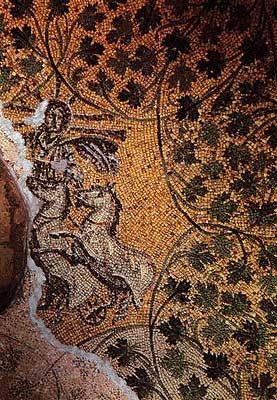 Christ as Helios? The mosaic from Vatican tomb M

When the basilica of St. Peter in Rome, built in the 4th century by Constantine, was demolished in the 16th century prior to building the current church, the workmen discovered that a pagan cemetery lay under part of the site.  This included a street of tombs, as Roman tombs were often built outside the city beside roads, which must have been inaccessible after the basilica was built.  Construction for St Peters began around 320 AD.

The mausolea were largely forgotten until the 1940’s when new excavations under St. Peters rediscovered them.  It is possible, in fact, to visit the tombs, although only by pre-arrangement.

One of the tombs, the smallest, given the letter ‘M’ contains an interesting mosaic.  The tomb was first entered in 1574, through a hole in the ceiling.  An inscription over the doorway — and overtly pagan –, which has since been lost[2], recorded that the tomb was that of Julius Tarpeianus and his family.  But it became famous from the 1940’s because of the mosaics, and in particular because of the charioteer.  The mausoleum itself was built in the 2nd century, in the space left between tombs L and N, and so is only 1.98 x 1.63m in size, and 2m high.  But the ceiling is covered with the mosaic, which also covers the upper parts of the walls, and there is fresco below.  The mosaic and the fresco seems to be later than two cremation burials, but before four inhumation burials, and all of this must be before ca. 320 AD when the tomb became buried under the basilica.  Likewise in some of the other tombs there is overtly pagan imagery, but also the burials of Christians.[3]

The images of the walls of M are as follows: on the west wall, a man carrying a sheep on his shoulders; on the north wall, facing the entrance, an angler is catching a fish, while another fish swims away; on the east wall is a ship with two men on board, each with upraised right arm, but outside the ship another man is being swallowed head first by a sea monster.  On the ceiling is a man on a chariot, drawn by what were once four horses, but only two remain.  The hole in the ceiling, made in 1574 as a way in, obliterated the other two.  The charioteer is dressed in a long chiton and chlamys, has raised his right hand, and is holding a blue globe in his left.  His head has a crown of rays.

When the tomb was rediscovered in the 40’s, the images were immediately identified as Christian; the good shepherd (W), the angler (N), and Jonah (E).  All these are well-known in early Christian art.  Scholars therefore identified the tomb as Christian, rather than pagan; making it the only Christian tomb in the vicinity.

But the charioteer is Sol.  The iconography is definitely that of the Roman sun god.[4]  So what is it doing in a Christian mausoleum?

Some scholars, including Martin Wallraff[5], have supposed that Christ is here depicted using the imagery for the sun, as the “Sun of Justice”, so named in Augustine and other writers.  But Hijmans points out that nothing in the image suggests that this is Christ; and, since the image is clearly that of Sol, we should question instead our identification of the other characters, and look for pagan versions of the sheep-bearer, angler, and man being swallowed by a fish.  The first two, apparently, would be quite at home in a pagan context.[6]

If the two images belong to the same context, then there is a problem.  Hijmans states bluntly that there are no known images where Jonah is not Christian, or where Sol is.[7]  Instead he prefers to see the whole mausoleum as pagan, arguing as follows:

It is time reenter the mausoleum with Roman eyes, if possible, avoiding premature and possibly anachronistic assumptions about the nature and identity of the figures in the mosaic. If we look again at the mausoleum as a whole, without labeling the figures, a different, quite obvious, and very Roman pattern reveals itself. To begin with, the vine and the lack of borders emphasize the interconnectedness of the scenes. Clearly the images combine to form a single theme, and it is quickly apparent which. On the East wall, with its ship and the sea-monster, we have the ocean. On the West wall, opposite the sea, we have the sheep-bearer signifying land. On the North wall the angler occupies the area of transition from sea to land. The vault, with Sol, represents the sky and light, while darkness and the underworld are below, represented by the lower parts of the mausoleum and the tombs therein. In short, the imagery defines mausoleum M as a “cosmos”, or at least as a “world”, and endows it with a basic visual rhythm for which there are many parallels in Roman art.

That rhythm is one of land, sea, and sky articulating the image, and we find it both in Roman art in general and, more specifically, in Roman funerary art. In the third century AD the sheep-bearer and the angler were particularly common as antithetical figures denoting land and sea reaspectively.28 Sometimes Oceanus replaces the angler and the basic pattern may be expanded to include other figures.29 Such scenes do not provide parallels in a strict sense for mausoleum M, but show that the basic pattern we have identified in the mosaic is one which would not take a Roman viewer by surprise.

With this basic pattern we sidestep the question whether the mausoleum is pagan or Christian. Sol is the sun and represents the heavens, and the man-devouring ketos represents the sea.[8]

Do we agree?  I suspect that we must decline to decide.  It seems clear that the religious context of the tomb is uncertain.  The meaning of all the figures is less than certain, and to some degree contradictory.  It would seem safest, where scholars disagree, to refrain from confident assertions of either kind.