I’ve done a little more OCR on the English translation of Ibn Abi Usaibia, but it is slow going.  Unfortunately I have had a cold for some weeks — symptoms are coughing and indigestion, curiously — which restricts what I can do in the evenings.  When I get well, it will be easier to spend more time on it.

Two people have bought copies of the CDROM that I sell of the English translations of the Fathers.  One of these was in Japan, and has an address in Japanese characters.  That will be interesting to process!  The other had an invalid email address, forcing me to recheck it in Paypal and re-email him.

Another email was from a great-nephew of the French philologist, François Nau (d. 1931), Pierre Sabatier.  Nau edited and translated great quantities of Syriac and Christian Arabic texts, often in the Revue de l’Orient Chretien, whose volumes remain indispensable even now.

Back in 2008 I created a Wikipedia article for Nau, and mentioned that a collection of his articles was due to appear in 2007.  Dr Sabatier discovered this, and emailed me, offering to help with any such volume, and regretting that I no longer contribute to Wikipedia.  Someone must have emailed me about that commemorative volume.  But, several years later, I don’t remember anything about it.  Nor did a search of my emails reveal anything.  So I posted something in the Hugoye list for Syriacists, to see if anyone knows.

And … there!  Somehow, the evening is gone, and nothing achieved.

Well, almost nothing: I did watch a bit of the new TV series Merlin, featuring the rather pre-Raphaelite-looking Katie McGrath as the evil sorceress Morgana… 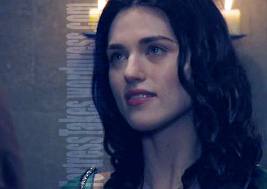 Searching for an image to include revealed that the BBC employ some hilariously stupid publicity people.  The first one I chose and uploaded promptly vomited a load of copyright nonsense into the WordPress description — “only to be used in print, only after this date, special permission for internet yadda yadda yadda” — which effectually deterred me from using it.