Looking around Picasa, I came across the following fascinating photograph by John Bartram of a pair of tauroctonies (click on the image for a larger view): 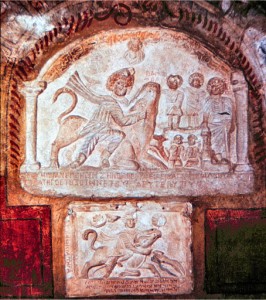 Now the resolution is a little low but … what is the script on the lower tauroctony?  The upper inscription is Greek, plainly enough, although I can’t quite read it.  But the lower script looks very unfamiliar.

UPDATE: I find that I have some pages on disk taken from the 1936 publication of the Mithraeum.[1]  On p.83 I find the following:

The smaller cult bas-relief (PI. XXIX, I) has a double inscription: one (of three lines) in Palmyrene is inscribed on the base of the bas-relief inside a tabella ansata, the other on the face of the left side of the molding. Letters are cut and painted red. On the text of these inscriptions Professor Torrey submits the following note:

“Below the smaller Mithras relief is a Palmyrene inscription in three lines. This is accompanied by a vertical line of Greek (0.24 m. long) at the left of the relief (no. 145), repeating the name and title of the author. The first letters of the latter inscription are so worn away as to be barely legible; it reads (height of letters 0.01.5-0.021 m.) :

“The name Ethpeni is otherwise known as Palmyrene, and the pronunciation of the final syllable is now made certain by the Greek transcription. This is a simple verbal form, the ethpe`el perfect: …”

The following philological notes make plain that Palmyrene is a dialect of Aramaic, as mention of the ethpeel form makes plain to anyone with a smattering of Syriac.  The tabella ansata is the rectangular box with triangles at the end.

On p.84 Torrey’s note is continued:

On the next page the text of a Latin inscription elsewhere in the building is given, which indicates the restoration templum dei solis invicti Mithrae — the Mithraeum — under the three emperors Septimius Severus, Caracalla, and Geta, who ruled together in 209-212 A.D. This inscription was added by a Roman legionary vexillation, and marks a subsequent layer of occupation.

3 thoughts on “Image of Mithras at Dura Europos”