Every year, I look forward to a couple of things as the evenings draw in, and the mornings begin with frost in the air.

The first of these is that, mysteriously, men appear in the town square on Saturday mornings who sell roast chestnuts. 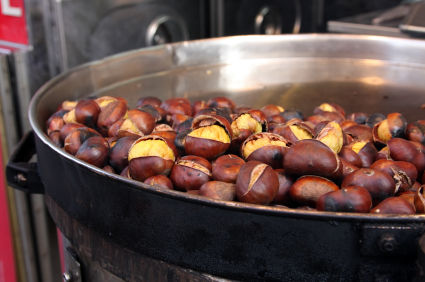 Admittedly in my own town, they don’t bother to get set up much before noon, so I rarely get to have any.  I’ve been and gone by then!

The best street vendors are in London, where the quick turnover means that all the chestnuts are well-cooked.

But still, it’s something I look forward to.  What childhood memory they evoke I cannot say, but clearly there is something.

You can’t eat too many — they contain something poisonous, I believe.

But nevertheless, the charcoaled items will be consumed by me this winter, if at all possible.

The other items to which I look forward are also seasonal.  I will welcome the arrival of the new season’s brussell sprouts.  You have to cook these rather exactly — 8 of them, in boiling water for precisely 8 minutes and not as second longer — but they taste good when fresh.  When I had Christmas alone, as I did for a couple of years recently, they formed part of the seasonal meal.

The shorter days do tend to leave us all feeling a bit strange, and a bit jet-lagged.  It can be a sad time too, for those sensitive enough to feel the change of season but not perceptive enough to realise the source of their moods.  But there are good things to be had, and we need to try to enjoy them.