Every temple of Mithras had a bas-relief at one end depicting Mithras killing the bull.  On either side stand two figures carrying torches, one with the flame pointing up, the other with it pointing down.  Every textbook refers to these as “Cautes” and “Cautopates”, although no literary text mentions either.

So how do we know that these were their names?  And which is which?

In Cumont’s Textes et Monumentes, vol. 1, p.207 we find the following statement about the torch-bearers or dadophores.  (The reader should bear in mind that in vol. 2, for some curious reason, Cumont gave the inscriptions first, with numerals; and then the monuments, with fresh numbers; and that a relief or statue with an inscription would be listed twice).

By a happy accident we know the barbarous names that the two dadophores bore in Mithraic ritual.  Two pairs of statues accompanied with inscriptions have recently come to light, and demonstrate that the being with the raised torch is named Cautes and the one with the lowered torch is named Cautopates.[5]  Elsewhere the statues themselves have not been preserved, but the pedestals on which they stood have survived, grouped in pairs, and on one is engraved the dedication Caute or Cauti and on the other Cautipati. [6]

5) Monument 248 c, discovered in 1851, which bears the inscription D. I. M. Cautopati, was supposed at this period by Dieffenbach and by Ring to indicate that the dadophor with the lowered torch was called Cautopates, but that Cautes and Cautopates were synonymous.  New discoveries permit us to rectify this mistake.  Cautes and Cautopates are the two dadophores at Sarmizegetusa: mon. 140 (inscr. 259); at Heddernheim: mon. 253 i, 2, 4 (inscr. 441 b, c).

6) Aquileia: inscr. 165 a, b; Aquincum: mon. 213 d, inscr. 329, 330 — Similarly in the temple recently discovered at Pettau by Gurlitt, an altar has been brought to light with the dedication Cauti, another with Cautopati. — Were there two dedications to Caute at Heddernheim?  Cf. Lehner, Korrespondbl. Westd. Zeitsch., XVII, no. 89, p.129 — The complete list of inscriptions mentioning these deities is given in vol. 2, p. 533, col. a. — The only forms that are encountered are Caute or Cauti or Cautopati or Kautopati.  The dative Cauto and therefore the nominative Cautus does not exist (inscr. 165 a, note). — The abbreviation C. P. for Cautopati, does not prove that we should decompose this name into two words.  Rather it serves to distinguish it from Caute, for which the abbreviation is a simple C. (inscr. 371, 434).

That is a lot of material packed into a couple of lines and a couple of footnotes; but Cumont was a great man, which is why his work in some respects has yet to be superceded, 110 years later.  Let’s look at some of these references. 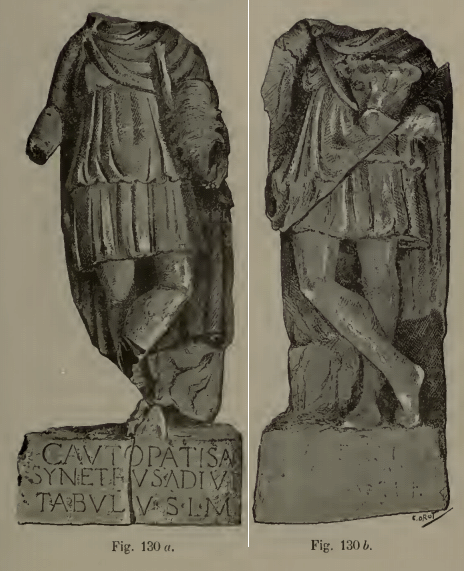 These are described as follows:

Mithraic dadophores, in the usual costume and pose.  They carry in their right hands, one a lowered torch, the other a raised torch, but both are broken … in the left hand the first carries a scorpion, the second the head of a bull.  On the bases are inscriptions 259.

That identifies “Cautopates” as the object of the votive offering on the first statue-altar. 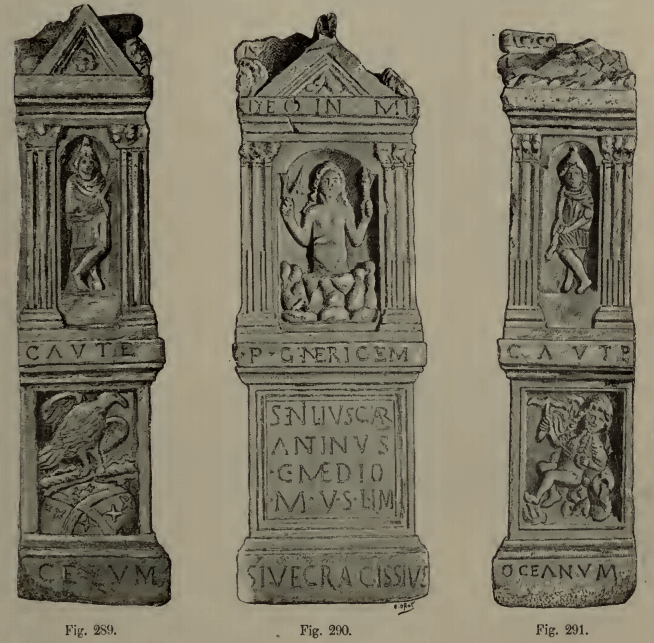 Under a representation of Mithras born from a rock are the words:

On the right-hand side, under the torchbearer holding a torch up:

Under the person on an urn:

On the left-hand side, under the torchbearer holding a torch pointing down:

Under the eagle on a sphere:

That seems fairly final: we have the image, and a label underneath.

6 thoughts on “How do we know that Mithras’ sidekicks were called “Cautes” and “Cautopates”?”