Thuggery online is a problem for the ordinary blogger.  Many of us have had to close our comments, or else ignore whatever is in them, or both.  Too often our peace of mind is at the mercy of the online equivalent of a lynching, and the ordinary victim may not even be that sure as to what on earth has happened to him.

For this reason, it’s worth detailing a politically motivated attack on myself, undertaken yesterday and today.  If you blog, it’s worth familiarising yourself with the tactics employed here.  Once you realise it’s a cold-blooded process of inflicting pain in order to silence, you will feel less compunction in defending yourself.

Yesterday I wrote what I believed to be an innocuous piece about poor service at Suffolk libraries, based on personal experience.  After writing it, I emailed the URL to Suffolk County Council, suggesting that it be passed to their media team for comment.

I received no response from the council.  But this afternoon, when I came back, I found a series of abusive “comments” by first-time commenters on the article.  These I traced back to a blog, http://rosehillreaders.wordpress.com/, and a twitter feed: 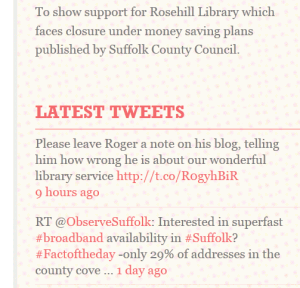 I can only presume that one of the council officials, rather than addressing my post, decided to slip the word to his political allies that someone needed a thumping.  For how else would my specialised blog come to the attention of these people?

Of itself the blog looks like a harmless political blog, campaigning against the closure for cost-saving reasons of some small local libraries.  It’s a campaign that, on the face of it, any of us might support.

But there’s no name on the blog — never a good sign.  Who is this blog?  And the people who arrived … well, here are some extracts from the “comments”:

“I couldn’t disagree with you more (and that’s ignoring your puerile sexism). … Besides, why don’t you head upstairs if you want to read in silence?”

“You just seem to want it to be for those who would want the same high brow books as yourself. You would be the first to complain if it closed. If the Tories get their way there will be no libraries left in this County- that should please you!”

“If you want there to be any libraries left, in Suffolk, you would be better served by using your blog to champion their place in the community, rather than making patronising and uninformed attacks on them and their staff.”

“You are correct in your assertion that women make mistakes. Your mother giving birth to you is a prime example of such poor judgement.”

These were not comments on my post — this was heckling, this was personal abuse intended to hurt.  I’ve seen this kind of thing before, when “comments” are used to try and give a blogger a slapping, to intimidate, to harass, anything to stop him writing on the subject.

Most bloggers tend to be taken by surprise by this kind of comment.  Being decent folk themselves, they presume the comment writers are sincere.  They foolishly try to respond, to defend themselves, to explain.  All they are doing, of course, is allowing their assailants to change the subject from “Why Suffolk libraries are not very good” to “Why Roger Pearse is a bad person”.

It’s classic troll territory.  No normal person likes being on the receiving end of this kind of thing.  Everyone finds it unpleasant.  Everyone would like to avoid this.  And so, in order to avoid it, people avoid talking about things which are liable to get them a cyber-lynching like this.

However, I’ve played before.  I didn’t even pause, but the hit the delete key on each of them, without even bothering to read past the first stock jeer.  They’re writing to upset and manipulate me; so why should I bother to allow their words past my eyeballs?  And I don’t.

But of course I knew what would come next.  Usually these creeps split into two groups.  One lot shriek crude abuse; the other lot pretend to be polite.  The idea is that the first lot may get canned, but most people, in order to show that they are reasonable, will be disposed to be seen to be friendly towards the second lot, who can then try to manipulate this.  Usually the latter lot will try to suggest the *victim* is being rude, or is in the wrong.  Once again, they want to change the subject to “Is Roger Pearse a bad person”.

Nor was I disappointed:

“None of those comments were abusive in any way.  They simply put forward an alternative viewpoint.  Freedom of speech cannot be cast aside on a whim.”

“I have read your comments policy, can you just clarify what this means … just trying to be clear on why you delete certain comments.”

“I’m sorry to say this (wait, no I’m not!) but this post reeks of misogyny. Please stop.”

“Perhaps we can add cowardice to that, too? If you are offended by being accused of misogyny then please defend your comments.”

“I see you have removed my comment.  I screengrabbed it in case you had done so. Can you please explain why my comment was removed?  I will simply have to reproduce it elsewhere in reference to this post otherwise.”

“The problem is, Roger, all the polite comments (and the majority were polite) ARE relevant as this blog references freedom of speech. I am bemused as to why some of these comments (including mine) have been deleted and I will be posting them elsewhere to underline the point.”

The sincerity of the last comment may be judged from the fact that, after I banned this commenter, he kept trying to post under other user names, determined to “get at me” somehow.  And what kind of commenter first screen-grabs his comments?  Only one who is out to cause trouble.  And needless to say, when I posted a comment on the originating blog, complaining about their action, it was silently deleted.

Much of this is like the sort of things that happened in the playground at bad schools.  Yes, we even had the bully’s old favourite, “You’re not being bullied / harassed / whatever, it’s not our fault, what is happening to you is your fault!”  The thug always denies responsibility, and blames the victim:

“I must say that I don’t think any of them were abusive: they challenged some of your premisses and your own offensive statements towards women but to describe the comments as ‘abusive’ seems something of a stretch.”

“I’m interested, also, that you suggest that you consider people disagreeing with you to be in some way flaming when I might also point out that your post (as demonstrated by the many comments!) is, by your definition then, more than a bit troll-y.”

But it is not innocent.  Someone less experienced in the ways of thuggery online could be badly hurt and upset by this.  This is deliberate violence, intended to give pain just as  much as a physical beating would be.

In this case, it’s actually rent-a-mob violence, orchestrated for political ends under the misapprehension that I was One Of The Enemy.  Unbeknownst to me, the library service is currently a political hot-potato.  The council wants to close some of the libraries.  Some  honest people are opposed; and some of the usual left-wing thugs are along for the ride.  In this case one of the thugs was tipped off about my post, and invited other thugs to put the boot in, without even realising that I hadn’t commented on The Cause at all!

Watch for the signs, people.  That delete key on the comments box is there for a reason.  Use it mercilessly, if you get even the faintest feeling of discomfort.  You’re contributing to the web; such commenters are there only to beat you up and damage what you’re doing for their own selfish ends.