A mention of the word “Dracula” led me to think of the historical Rumanian noble who adopted the title, which means “little dragon”, and is the diminutive of the Latin “draco” or “dragon”.  He did so,* because the “draco” was the standard of the late Roman armies, and so it was a symbol of imperial power and authority.

I don’t know whether the armies of Byzantium continued to use the “draco” standard into the dark ages, such that the Rumanians were familiar with it into the middle ages.  How long had it been, I wonder, since an emperor had despatched an army in the east under that standard?

The last Roman army in the west was defeated by the Franks in 484 AD.  Yet the golden dragon was the symbol of the kingdom of Wessex, and later of England, as it resisted the Vikings, and it flew in the wind at Hastings in 1066.

After the fall of the Anglo-Saxon kingdom, the dragon was still seen in Wales, where the Red Dragon is still the symbol of the principality.

How many, of those who see the heraldic medieval image below, think of the reality behind it, a last memory of the power, might and majesty of Valentinian and Theodosius? 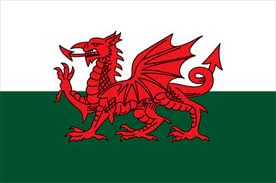 * Postscript: I have received various emails pointing out that Dracul had various immediate reasons to use the title.  I was thinking, rather, of how the “draco” symbol attracted a desirable status in the first place: from ancient Rome.

16 thoughts on “Looking for the dragon standard”