Judith Weingarten has written a post on Whose Christmas is it anyway? at her blog, which is solid stuff, and kindly mentions me.  But I got very excited when I read it!  Because of this: a picture of the ruins of the temple of Sol Invictus in Rome, from 1629: 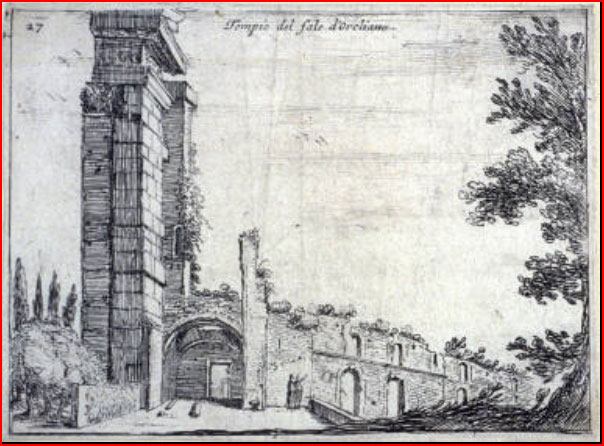 The image is from the The Amica Libary website.

In truth I’m not sure what we’re looking at, or where from.  The temple was on the Quirinal, I know; and steps from the temple survived as they were reused for some other monument in modern times.

The book from which this image is drawn is Giovanni Batista Mercati, Alcune vedute et prospettive di luoghi dishabitati di Roma, (=Some Views and Perspectives of the Uninhabited Places of Rome), Rome, 1629, in which it is plate 27.  The volume was in quarto, comprising some 52 sheets in all.  An Italian reprint exists: I’m almost tempted to stump up the 100 euros to buy it! (But not quite)

O, if only this were online!