Last Saturday (11th Feb) I met with a group of 18 people, mainly from local churches, at 4pm.  Destination: Israel!  The tour was organised by a clergyman as a pilgrimage, through a firm called McCabe.  Our flight from Heathrow was at 22:30, so we departed in order to have plenty of time.  Unfortunately the McCabe arrangements only begin at Heathrow, and our party had hired a minibus which broke down!  The driver seemed to have no idea what to do.  We ended up calling the police, being towed off the road, and getting some taxis ourselves.   That was very high stress, but we arrived OK.  The temperature on the M25, as we travelled, hit -8C, which was a little low.

At Heathrow we were met by McCabe representatives, and really spent very little time going through the security and waiting around.  When we arrived at the departure gate, various people from the couple of hundred travellers there were called over for an extra grilling in a little room.  Nearly all the travellers were older, so it was quite curious that two of the three so chosen happened to be young, pretty and female.  El Al, you need to clamp down on this.

Then we had an overnight flight of some four and a half hours.  In truth it was impossible to sleep in the cramped conditions, so it was with some relief that we arrived at Tel Aviv at 05:15 on Sunday.

We were met by a local guide calling himself “Johnny”, who shepherded us onto coaches.  It was already light, and we drove to Jerusalem, stopping on the Mount of Olives for a view over the city.  This was pretty chilly, although the sun was up. 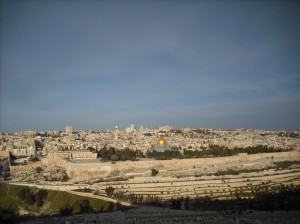 By 8am we were at our hotel, the Golden Walls in Jerusalem, where a breakfast had been laid on.  I ate very sparingly, since I wanted to get some sleep.  We were allocated three hours to rest, and then off again.  There was an alternative of going to church, which a couple of people did (and paid for in exhaustion later).

This part of the tour was rather daft, in truth.  I slept for two hours and woke feeling really sick.  Fortunately I recovered somewhat during the next hour.  We were then taken to the Jerusalem hotel for lunch.  A lot of food on a tired stomach is never a good idea, so I stuck with a bit of bread and water.  We then walked through the old city to the wailing wall area.  I was struck with the reflection that, in the womens’ section, probably very few of those visiting were praying for a life of singleness! 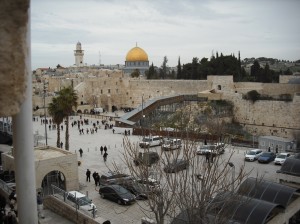 Some of the party then got back on the coach to go back to the hotel, while the rest of us walked back through the old city.  This turned into quite a route march, which was probably a mistake again.  However we got back to the hotel at sunset, and there was an excellent buffet.

The Golden Walls hotel is a 3* establishment.  Externally it consists of a doorway between some scruffy shops.  Internally it is much better.  The rooms are adequate, rather than special.  There was a very thin connecting door from my room to the next one, which I had to lock myself (!)  More concerning was the lack of any curtains other than some bits of gauze.  These turned up the following day.  The food on offer was a hot buffet and was excellent.  And even I — a light sleeper — was so tired that I slept quite well.

On Monday morning it was breakfast again — all meals were included.  I noted that the hotel contained at least four different McCabe pilgrimages, as tables were reserved “for Revd XYZ” with the company name on.  The breakfast was good.  We had a wakeup call for 06:30, breakfast from 07:00, and onto the coach at 0800.  Remember that Israel is 2 hours ahead, so these were early hours, as far as our body-clocks were concerned!

The morning was spent visiting the churches on the Mount of Olives, and then going to the pool of Bethesda.  One feature of the trip was that a hymn book (well, pamphlet) formed part of the tour materials, so we all sang a hymn in the crusader church of St Anne’s next door.  Then there was lunch at the Ecce Homo convent in the Old City — a really excellent establishment, where we met other people from Ipswich.  The afternoon was spent in the Old City, and visiting the church of the Holy Sepulchre, where I got to see the tomb of Christ for the first time, thanks to some reasonably small queues.  Then we headed out to the garden tomb, and then back to the hotel. 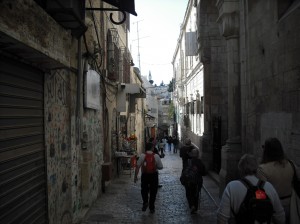 One nice feature of the location of the hotel is that there are shops nearby.  We were hastened past any of the shopping in the Old City — indeed this was a rather curious feature of the tour — but I was able, in the evening, to locate somewhere that I could buy some crisps and chocolate.  For what is life without these?  Even so, with all the exercise, I lost quite a bit of weight on the tour.  Not that I am complaining, I should add!

On the Tuesday it was another early start, this time vacating our rooms as we were on our travels.  The morning involved a visit to the Shepherds’ fields — where the angel announced the birth of Jesus, where we had a communion service.  This meant passing through an Israeli checkpoint — very easy — and into the West Bank.  Sadly it also meant a lot of pro-Palestinian propaganda about how nasty the Israelis were for building a barrier.  Since I didn’t hear the words “suicide bomber” at any point — the reason for all that expenditure — I tuned out the lot as special pleading, which it was.

We were then taken into a local shop and stood there with the door closed for 45 minutes while they tried to sell us stuff.  I proved resistant to this, as I don’t care for this kind of organised pocket-emptying.  Indeed, given that we were rushed past everyone else, I really didn’t like this at all.  But here’s a photo of our bus outside the tourist trap. 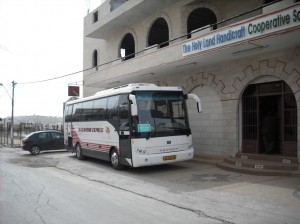 Then onto Bethlehem, to Manger square, and into the basilica, which turns out to be the work of Justinian.  Interestingly this time we saw the caves where St. Jerome lived when he was there.  It’s hard to imagine that he worked down there, tho — wouldn’t all that literary work have required more light?  Lunch was next door at a place called the Casa Nova, which was — as usual — very good.

In the afternoon we went to the Israeli Museum to see the model of ancient Jerusalem, and the Shrine of the Book.  While there some dignitary arrived, shepherded by policemen in cars without number plates — only unimportant people need number plates, it seems.  The Shrine of the Book was cunningly designed with invisible steps in darkness inside so that people fell over them.  The light level was so low, indeed, that I was unable to read much of the material in there.  The replica of the Isaiah scroll from the Dead Sea was interesting, in that it was largely intact.  The divisions in the text, and the horizontal line in the margin indicating verse divisions, was interesting to see.  Text divisions in ancient texts are, as regular readers will know, an interest of mine.

Finally we drove into the Judaean wilderness, stopping to climb a hill and look out over some of the bleak landscape. 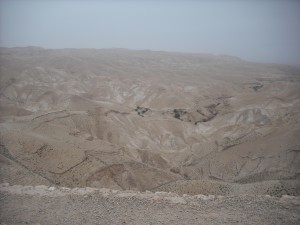 Then back on the bus, and we drove down to Jericho, ears popping as the road descended below sea level.  We stayed at the Intercontinental hotel.  This was a curious place, originally built as a casino, and now stood in the middle of nowhere.  The bags didn’t turn up at all quickly and I had to go and get mine from the slothful hands of a bell boy who showed no disposition to release it to me.  The food buffet wasn’t very good, and much of the same stuff appeared at breakfast where it was most unwelcome.  I can’t recommend this hotel, particularly as I was placed in room 212, right next to the service lift.

Back into the bus early on Wednesday, and a short drive to the dead sea.  I had provided myself with swimming trunks — never had an M&S sales assistant apologise for their range before, and mine came from Debenhams — and so made the splash.  The facilities were very basic, which meant that it took a long time to get out of the water and get dressed without ending up with sand in your shoes for the rest of the day.  It was interesting to see one girl simply too nervous to sit down in the water and lie back.  It was quite cold, tho.

Then on to Nazareth, to a theme park called the “Nazareth Village”.  I admit this wasn’t for me, and neither was the food which seemed in rather short supply.  After lunch we went into Nazareth and to the basilica of the Annunciation and to the Synagogue church.  After that, a drive to Tiberias, although we did visit Cana along the way.  We were rather grateful to reach Tiberias, where we stayed at the Ron Beach hotel.  The room I had looked out over the sea of Galilee, and the food here was good (although not as good as the Golden Walls). 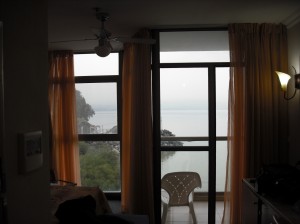 One interesting feature of the Ron Beach was an atrium lounge, where there was a piano.  We quickly found that another McCabe group was staying there, who were on a 10-day tour (these seem better value than the 5 day tours), and were Scottish.  In the evening they gathered around the piano and hammered out and sang loudly various songs from the Second World War, such as “It’s a long way to Tipperary”.  We all joined in, of course.  What the hotel staff made of all this I don’t know, but it was great fun!

On Thursday we drove to visit various sites associated with Jesus’ ministry, including Capernaum and a communion at the church of the loaves and fishes.  There was quite a bit of rain around today.  Lunch was at the church of the Beatitudes, where we were offered St. Peter’s fish (I, as ever, stuck to bread during the day).  In the afternoon there was a boat ride from a Kibbutz, and, fortunately, it did not rain while we were out there. We got back around 16:00.  A few of us walked into Tiberias, although the town is not really that interesting.  After dinner, to bed around 21:00; for the wakeup call to go home on Friday was at 03:00.  That night it rained and rained!  A very long day of travel then brought us home.

It was a great tour.  The people I was with were very nice people, and I found plenty to talk about with many of them.  I also met a couple of people whom I hope will become friends — indeed I met one of them in town today.  It was sad, indeed, when we all disappeared in different directions on the last day.  It was,  in truth, a very nice way to meet people.

4 thoughts on “A pilgrimage to Israel”