With the new availability online of images of the British Library ms. Harley MS 2676 (Pliny the Elder, Historia naturalis,  Florence, 1465-1467), we can now investigate just how the chapter titles are presented in a manuscript.

Technical note: there seems to be no way to link directly from here to the pages in question.  Ideally I would link the images below direct to the full page, so that readers could scroll around and examine for themselves, but sadly this does not seem to be possible.

In this manuscript, there is first a list of books, with a numeral at the front.  Then there are the chapter titles, gathered by book, but … with no chapter numeral at the front of each title!  Here is a screen grab of folio 2r, where the titles for book 2 (book 1 is a preface) appear, and the numerals do not: 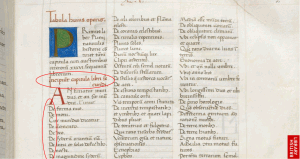 It is unlikely that a humanist copyist would have removed the numerals, so I think we may take it that they were not present in the ancestor copies either.

And how do the titles appear in book 2, in the body of the text?  They appear, naturally, without numerals either, as marginalia.  Here is folio 20v (there seems to be no way to link directly to the page):

But here is the rub: the “titles” are not the same.  In the contents, the first title is “de forma eius” — “concerning its form” — which references the preceding sentence that indicates the book is about the world.  The next title, “de motu”, is the same in both.

Each of these titles has an initial.  But the third title, lower down the page, does not.  There is no paragraph break either:

It is left to the reader to determine where, if anywhere, the break should be.  The paragraph breaks, the initials, do not relate to the chapter titles, then.

But … were the marginal chapter titles even present in earlier manuscripts?  Or were these placed where they are by the humanist copyist?

In book 1, which has no chapter titles, we find what are plainly renaissance glosses, highlighting a mention of Cicero, for instance, written in the column to the side.  Similar notes seem to appear later: on f.22r there is a marginal note “pythagoras”, written as if it was a chapter title.

The answer to this must appear from looking at more, and older, manuscripts.

All the same, we do see that numbering chapter titles in the body of the text was not something that just happened naturally, since these have none.  They seem, indeed, more like “headings”, indicating content, than chapter divisions as we would have them.  And indeed, “capituli” is precisely that … “headings”!

Perhaps we should take the Latin more seriously, and modern habits of book making rather less so.

5 thoughts on “Chapter titles in Pliny the Elder”