AWOL has drawn my attention to a rather curious article by the president of the Archaeological Institute of America, Elizabeth Bartman.

The Federal Research Public Access Act of 2012 was introduced in both houses of Congress on February 9 of this year.

The legislation would require that publishers of academic and scholarly journals provide the government with final peer-reviewed and edited manuscripts, and, six months after their publication, those manuscripts would be made available to the public, on the Internet, for no charge. The House bill states, “The Federal Government funds basic and applied research with the expectation that new ideas and discoveries that result from the research, if shared and effectively disseminated, will advance science and improve the lives and welfare of people of the United States and around the world.”

Quite properly too.  Who but a vested interest could argue that those who pay should be able to see the fruits of what they pay for?  Well…

We at the Archaeological Institute of America (AIA), along with our colleagues at the American Anthropological Association and other learned societies, have taken a stand against open access. Here at the AIA, we particularly object to having such a scheme imposed on us from the outside …

Here at the AIA, we particularly object to having such a scheme imposed on us from the outside when, in fact, during the AIA’s more than 130-year history, we have energetically supported the broad dissemination of knowledge, and do so through our extensive program of events and lectures for the general public and through our publications.

Emphasis mine.  This woman believes that the public must pay for the research, but is NOT entitled to see the research.  Instead they should be grateful to be allowed to attend the occasional public lecture — if they live anywhere nearby — and to know that the publications exist, even if they can’t ever see them.  Wow.  That’s pretty obscurantist.

While it may be true that the government finances research, it does not fund the arduous peer-review process that lies at the heart of journal and scholarly publication, nor the considerable effort beyond that step that goes into preparing articles for publication. Those efforts are not without cost. When an archaeologist publishes his or her work, the final product has typically been significantly improved by the contributions of other professionals such as peer reviewers, editors, copywriters, photo editors, and designers. This is the context in which the work should appear. (Almost all scholarly books and many articles lead off with a lengthy list that acknowledges these individuals.)

What?  The public is to be denied access, because someone has to pay typesetters so that it can appear in nice printed form?!  Talk about cart before horse!  As for reviewers … erm, just how do reviewers get paid now?  By the taxpayer, of course, who funds every element of their life-style bar one or two.

But of course Mrs Bartman has published this article on the web.  We might ask, if we are cynical enough, how she was able to afford to place her article on the web?  After all, are there not “the contributions of other professionals such as peer reviewers, editors, copywriters, photo editors, and designers”?

There is a polite response here.

My own response, as a member of  the tax-paying public, is to suggest that AIA find another president.  Open access is morally right.  Obstructing it is morally wrong, and, for someone who lives off the public, disgustingly wrong.  Mrs Bartman needs to be removed, for the sake of the AIA itself.

UPDATE: Quite by coincidence I saw this cartoon at Trevin Wax.  For some reason it seemed relevant:

Ever wonder why textbooks are so expensive? Me too. (HT) 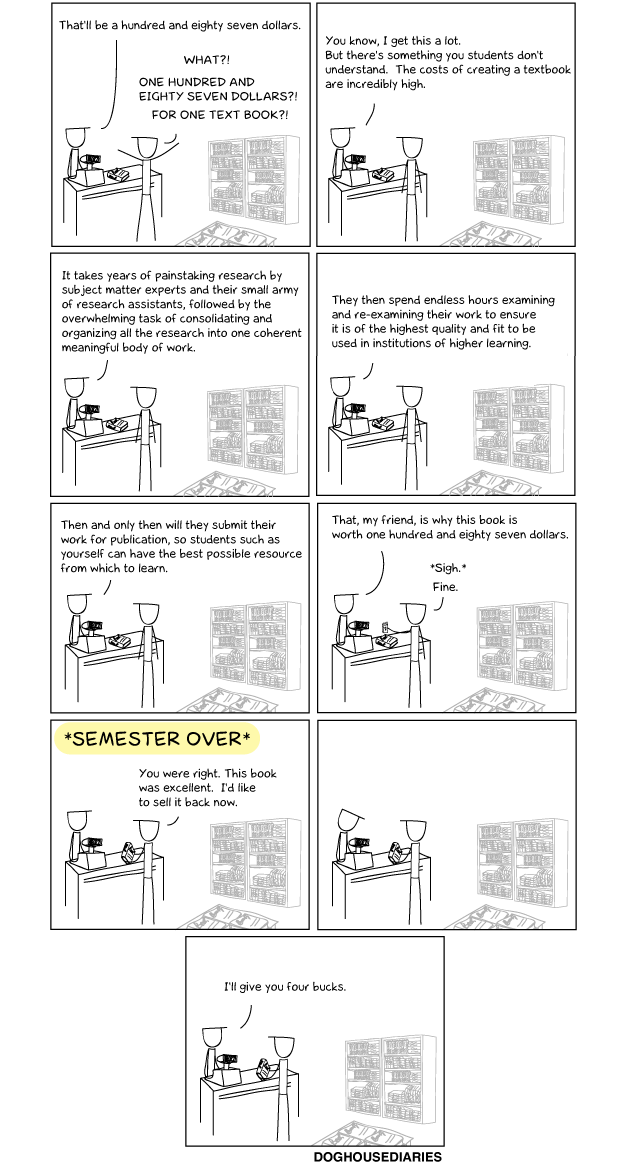 UPDATE: Another dissection of the same article here.