I chopped up the paperback English translation of Quintus Curtius, and ran it through my sheet-fed scanner.  It did work, but the results were less than satisfactory.  The scanner — a Fujitsu Scansnap — tended to look through the paper, or distort the colour of it.  That said, the OCR took place just fine.  But I’m not convinced that this is a satisfactory way to produce a PDF of a book.  The output was 100k in size, which is ridiculous.

Meanwhile several readers suggested that I investigate ways to convert a Kindle book into a PDF.  There is a script, written in Python, that removes the copy protection, but the sites on which this is hosted do not fill me with confidence.  However I was able to find a free utility, Calibre, that would do the whole process end-to-end.  I have not tried it on a commercial book, but I downloaded the Amazon Kindle-for-PC software, and Calibre seemed to work adequately with some free sample books.

I have continued working on some PHP scripts for the new Mithras pages.

Meanwhile my attention was distracted by something else.  The city of Norwich in East Anglia is a favourite day-trip destination of mine.  The city is commanded by a magnificent Norman stone keep on its mound, and has a splendid cathedral in the evocatively-named Tombland district.  It also boasts most of its medieval curtain wall.  But the medieval gates are gone, taken down on a evil day in the late 18th century by command of the local council. 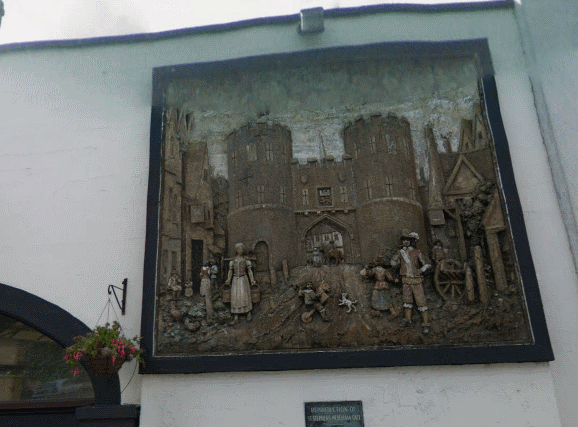 If you drive into Norwich from Ipswich, you come to the curtain wall at a large roundabout, where once St Stephen’s gate stood.  To your left, on a public house, is a large relief showing what the gate looked like (above).  I always park in the car park at St Stephens, so I see this every time.  But … what is the source for this?

Today I went on a little hunt to discover whether any images of the gate were online.  There is, indeed, a very nice collection of images and text from Norwich City Council here.  But before I stumbled across this, I came across the source for some of the material.

It seems that a series of drawings were made during the 18th century.  Some of these were published in the mid-19th century, and the publication is online.[1]

From this I extracted two images of the gate, with the town grown up around it, and clearly in poor repair but still standing.  Here they are: 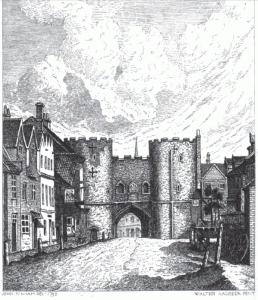 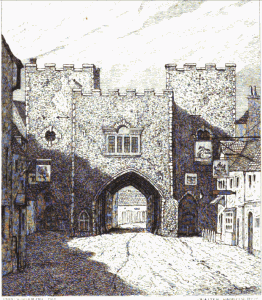 You can click on both, to see a larger image.  The gate had semi-circular towers, facing out, and a flat rear.

The council site has further images.  But it is interesting to see these items, all the same!

It would be facile to condemn the Norwich men of 1792 for ordering the destruction of these interesting historical monuments.  The gates were crumbling, doubtless unsightly, and a charge upon a corporation that had no use for them.  Why not demolish, they doubtless thought? (It would be interested to unearth their actual reasoning, which, curiously, is not given by Fitch in the book linked above).

Too often, it is only when men see the effect of their deeds that learning takes place.  It was the mass destruction of material in this period that helped bring about the romantic movement of the succeeding period, when what was being lost stirred a counter-movement.

In Egypt, the mass pillaging and destruction of the treasure-hunting period inspired Flinders Petrie to create the modern discipline of archaeology.  But perhaps the former had to happen, in order for men to realise the necessity of the latter.

All the same, it is permissible to wish that the gates of Norwich still stood.