A news item which seems to have passed unnoticed: the John Rylands library in Manchester, UK, is running an exhibition from today, 19th July until 25th December.

The ten mummy portrait panels and the 40 or so papyri, both from around 2000-years-ago, were mostly found in the Fayum region, south of Cairo.

Dating to the Roman Empire, the portraits and papyri provide a unique insight into how the  Egyptians living under Roman rule saw themselves.

The so-called ‘Fayum portraits’ were found covering the faces of mummies found by the archaeologist William Flinders Petrie in 1888 and 1911.

Petrie was financed by the wealthy Manchester cotton magnate Jesse Haworth, and most of the portraits came to the University’s Manchester Museum as his legacy.

The papyri came to Manchester through acquisitions made by John Rylands Library founder Enriqueta Rylands, from 1901 to her death (1908), and later continued by the Library until 1920.

They include famous pieces, such as one of the two extant Greek fragments of the apocryphal Gospel of Mary, possibly Mary of Magdala, and documents from everyday life such as a contract of marriage and census returns. 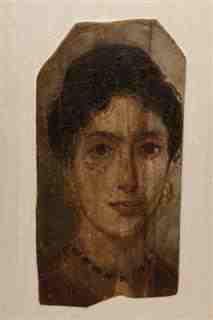 The exhibition is entitled Faces and Voices, and includes 10 of the marvellous Graeco-Roman portraits found by Flinders Petrie in the Fayoum.

The portraits were painted on boards, which were then attached to mummies, and so recovered in modern times.

The papyri are equally interesting.  Most are documentary; but there is a fragment of the pseudo-gospel of Mary.  It is mildly depressing to see some paleobabble in the press-release:

Professor Cooper said: “The exciting thing about the papyri is that they show a forgotten side of history. For example, the Gospel of Mary fragment argues that women should have a leadership role in the Christian church, a view which the medieval Church tried to suppress. This third-century document is very timely in light of the current debate about women bishops in the Church of England.”

This is a little misleading, I’m afraid.

The early Christians themselves tell us that there were people who followed teachings that they made up themselves, or borrowed from contemporary pagan culture rather than learned it from the apostles.  They also tell us that such folk were not above forging texts under the names of apostles, in order to project their teachings back into the apostolic age.  Various texts of this kind, from the 2nd century AD onwards, survive.  Each is clearly recognisable, in that it laces pseudo-biblical material with material derived from contemporary paganism, in just the manner described by Tertullian in De praescriptione haereticorum.  The so-called “gospel of Mary” is one of these late texts, and tells us nothing about early Christianity; only about those who sought to corrupt it.

Likewise the “women bishops” link is of doubtful relevance to antiquity.  Unless, of course, we could see this as just one more example of how outsiders in every age attempt to impose their own doctrines on Christians, by pressure, by politics, and by violence?  But I fear this is not what Dr Cooper intended that we should hear.

This lapse aside, it is still very pleasing to see these documents.  I was glad to see that English translations of some of the papyri were appearing on the blog.  More please!