The middle part of the third century AD is not well endowed with historical sources.  We are largely dependent on later, often very abbreviated, texts.  But about 50 years ago, an inscription was found in Persia, at Naqsh-e Rustam, which supplements these:

To these sources has recently been added a unique monument, the inscription of Shapuhr I, engraved on three walls of the first floor of the Kaabah of Zoroaster, the towerlike stone building of Achaemenian times which still stands in front of the rock cut graves of the Achaemenian kings of Persia near Persepolis at Naksh i Rustem (Pl. VII, 1-2).

The inscription which gives the same text in three languages, Arsacid Pehlevi, Sassanian Middle Persian, and Greek, was discovered in 1936 and 1939, by Dr. Erich Schmidt, director of the Iranian expedition of the Oriental Institute, University of Chicago. [1]

The “Kaabah of Zoroaster” is literally the “Cube of Zoroaster”, and looks just like one. The plates showing the monument are these: 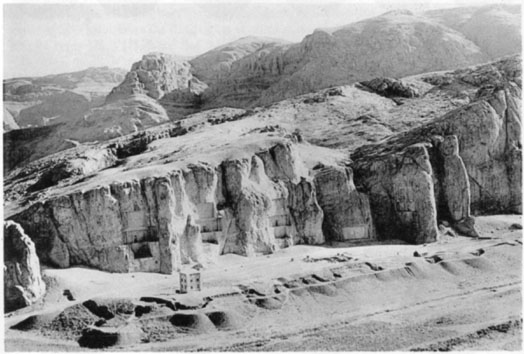 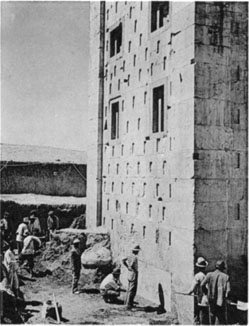 A complete English translation may be found here in PDF form.  I’m not sure where it comes from, tho.

Much of the text consists of material of interest only to Persian specialists.  But the portion of most interest to us is as follows (I have added extra paragraphing):

When at first we had become established in the empire, Gordian Caesar raised in all of the Roman Empire a force from the Goth and German realms and marched on Babylonia [Assyria] (Asuristan) against the Empire of Iran and against us. On the border of Babylonia at Misikhe, a great ‘frontal’ battle occurred. Gordian Caesar was killed and the Roman force was destroyed. And the Romans made Philip Caesar. Then Philip Caesar came to us for terms, and to ransom their lives, gave us 500,000 denars, and became tributary to us. And for this reason we have renamed Misikhe Peroz-Shapur.

And Caesar lied again and did wrong to Armenia. Then we attacked the Roman Empire and annihilated at Barbalissos a Roman force of 60,000 and Syria and the environs of Syria we burned, ruined and pillaged all.

And beyond Carrhae and Edessa we had a great battle with Valerian Caesar. We made prisoner ourselves with our own hands Valerian Caesar and the others, chiefs of that army, the praetorian prefect, senators; we made all prisoners and deported them to Persis. And Syria, Cilicia and Cappadocia we burned , ruined and pillaged.

And men of the Roman Empire, of non-Iranians, we deported. We settled them in the Empire of Iran in Persis, Parthia, Khuzistan, in Babylonia and in other lands where there were domains of our father, grandfathers and of our ancestors.

There are some interesting photographs of the site at the Wikipedia article, and there is a Wiki article on the Cube.  It seems that there is a further text in Middle Persian below that of Shapur I, the inscription of Kartir, a fire-priest.  This is online here,  and contains the following interesting statement:

And in kingdom after kingdom and place after place throughout the whole empire the services of Ahura Mazda and the Yazads became preeminent, and great dignity came to the Mazdayasnian religion and the magi in the empire, and the Yazads and water and fire and small cattle in the empire attained great satisfaction, while Ahriman and the devs were punished and rebuked, and the teachings of Ahriman and the devs departed from the empire and were abandoned. And Jews, Sramans (Buddhists), (10) Brahmins, Nasoreans (Orthodox Christians), (Gnostic) Christians, Maktak (Baptisers), and Zandiks (Manichaeans) in the empire were smitten, and destruction of idols and scattering of the stores of the devs and god-seats and nests was abandoned. And in kingdom after kingdom and place after place many divine services in magnificence and many Warharan fires were established, and many magi became happy and prosperous, and many fires and magi were imperially installed.

The translation does not seem to be very good.  But, if correct, I wonder if this indicates conversions to Christianity in the period, leading to the abandonment of temples, followed by this record of an official Sassanid counter-campaign?